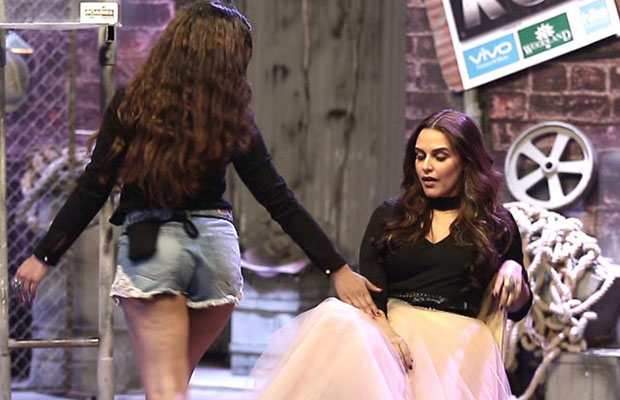 Prince Narula gets seduced by a female contestant on the reality show Roadies Rising, which is being judged by Neha Dhupia, Rannvijay Singh, and Karan Kundra.

The reality show, Roadies Rising has gone a level up. Like every season, this season witnessed some weird contestants on the show. The upcoming audition episode of the Roadies Rising will see a female contestant going dirty with Neha Dhupia and Prince Narula, who are the gang leaders of the show.

As per reports, the female contestant named, Divya, who is an air hostess, prefers calling herself ‘air hotness’. She gave a hot lap dance to Neha and Prince Narula in order to impress them.  While trying to seduce Prince, Divya asked him to be her boy toy. Too much-seducing skills, we see!

While Prince Narula shied away, Divya approached Neha Dhupia to continue her lap dance. The actress immediately agreed and quite comfortably enjoyed the dance. Going by the photos, it seems Prince had his heart in his mouth while Neha enjoyed it.

It seems there is going to be lots of hotness and the viewers have to deal with the oomph factor. Usually, contestants on the show come to show their stronger side and its all about winning the show with your strength but Divya in her audition form had admitted that one of her skills is seducing people.

Post-audition, Karan Kundra will be replaced by Nikhil Chinapa. Nikhil Chinappa will be seen joining the gang leaders for the main show of the season.