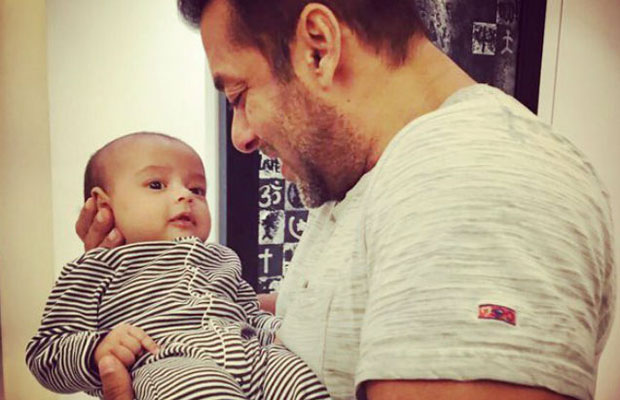 Salman Khan always has had a special place in his heart for his little sister Arpita. The actor has been a very doting elder brother and it seems like the brotherly love has gone a step further as the newly become mamu to little Ahil has become a doting uncle as well.

Arpita Khan was married to businessman Ayush Sharma IN 2014 and had a very adorable little baby boy named Ahil. Little Ahil has been mamu jaan’s apple of eye ever since. Sharma even posted a video on Instagram recently showing the dotting Salman singing the baby songs from his latest release Sultan.

The baby also seemed to have a great time laughing and dancing with the actor.

It was been reported that Salman had not gifted his sister Arpita anything as a present for her son’s birth. However, Salman has finally planned a unique gift for the baby which indeed is the purest token of love!

Reportedly, Salman has come up with a very unique and out of the box idea for his nephew. Apparently, Salman has roped in an impressionist artist to create a three-dimensional impression of the baby Ahil’s hands placed within his own hands.

Not just that, Salman has asked the artist to make the impression in pure gold!

Now if that isn’t a priceless gift from the Sultan, we don’t know what is!