Just a day before Aamir‘s Dangal release, the buddy Aamir Khan arranged a special screening of Dangal for his friend Salman Khan and other friends and it seems that every friend and star is praising the film and the star. After the Befikre star Ranveer Singh, it was Salman who expressed his appreciations for the film.

Well! Salman took on to Instagram and said that Dangal was much better than Sultan.

Check out here what Salman had to say about Dangal.

“ My Family saw #Dangal today evening and thought it was a much better film than #Sultan. Love u personally Aamir but hate u professionally!” 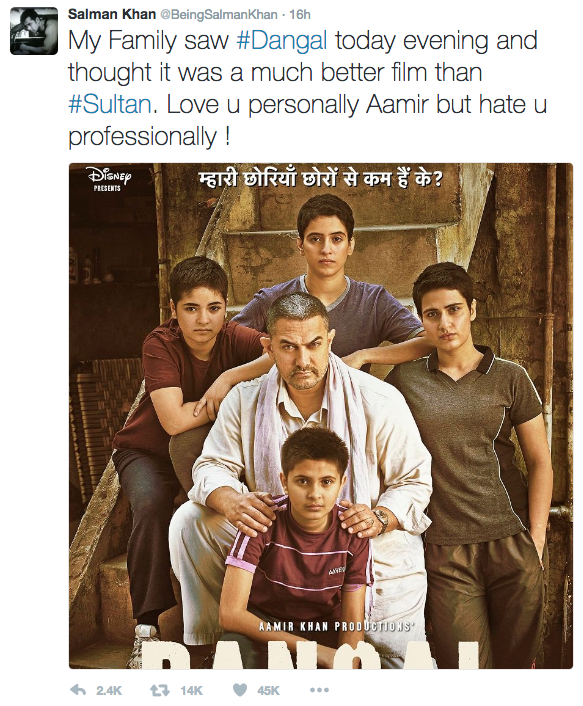 Salman Khan and Aamir Khan known for their friendship and super hit comic film Andaaz Apna Apna are always in the news for praising each other and making appearances.

While both the movies have a different theme, the sport portrayed brings in a point of comparison. Salman’s Sultan is a romantic sports drama and purely a work of fiction. Dangal is a biopic and a real story which is not a a romantic drama. But both the films have wrestling as the crux of the story and therefore brings in a comparison.

Nevertheless, while Sultan has been the highest grosser and appreciated, Dangal has been getting positive responses from the audiences. Let’s see if Dangal betas Sultan’s collections.