Bollywood actor Salman Khan recently released the first trailer of his film ‘Prem Ratan Dhan Payo’ opposite Sonam Kapoor. On the other hand, Akshay Kumar released his comedy flick ‘Singh Is Bliing’ this Friday and the film made an impressive opening at the Box Office.

But along with Akshay Kumar’s ‘Singh Is Bliing’, audiences who went to watch the film in theatres got a surprise treat, as Salman Khan’s ‘Prem Ratan Dhan Payo’ theatrical trailer was attached to the film.

Salman Khan who was amazed with the news that Akshay Kumar’s ‘Singh Is Bliing’ is going well at the Box Office and that his film’s trailer was attached to the film, took to his twitter handle to tweeted about the same. He tweeted, “Gonna see SIB , heard it’s funny. dint know prdp trailer released vit S I B. Frm the promos akki is looking really good n so is Amy.” 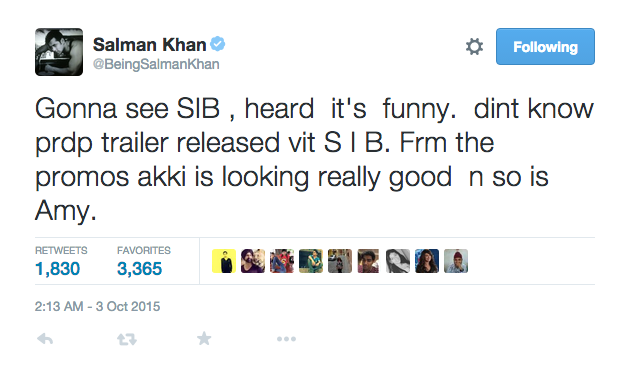 Well, Salman and Akshay Kumar share a great bond and have always appreciated each other during their success and its great to see their bonding at this level.

Also, rumours suggested that Bollywood actor Akshay Kumar might co-host with Salman Khan for Bigg Boss 9 this season but no confirmation regarding the same has been made yet. According to the reports, the channel is apparently deciding to have another host along with Salman Khan this year as the show itself says Double Trouble and now we cant imagine what trouble the contestants might face if this happens to be.

Recently, during the media interaction with Akshay Kumar at ‘GQ Men Of The Year Awards’, the actor was asked if he’s really co-hosting Bigg Boss 9 with Salman this year. To this the Singh is Bliing actor sharply replied, “What has that got to do with GQ? If you have something, some question about fashion, let’s talk.”

Akshay Kumar, who is known for his tongue in cheek remarks, literally avoided the question on ‘Bigg Boss 9′ and has still left it unanswered. Well, time will tell better!

Watch Video: When Salman Khan Had An Oops Moment!