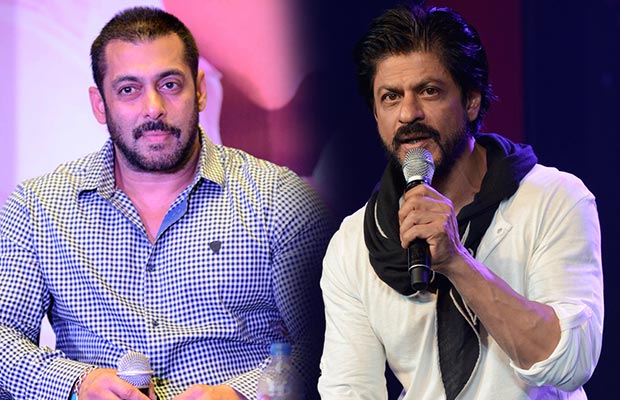 Shah Rukh Khan has been ruling the headlines way too much lately. The King Khan has been surrounded by controversies and war of words since his birthday. SRK who is known to be open minded and fearless when it comes to giving opinions has landed in a political chaos after he commented that there is extreme intolerance in India.

The venom of the blame game took a new turn altogether with SRK’s statement. From political parties to delegates, everyone shared varied number of reactions to Shah Rukh Khan’s intolerance remark. With some calling him an agent of Pakistan to some opining that his soul is in Pakistan, the intolerance comment row seems never ending.

After all the words and views exchange, the Dabangg Khan of the B-town Salman Khan was also asked to comment on the issue. During the promotions of the film ‘Prem Ratan Dhan Payo’, Salman was asked about the following issue and the matter that SRK was being compared to Pakistani terrorist Hafiz Saeed. The handsome actor did not hesitate and bluntly answered, “This is a wrong forum for that… We are here to promote ‘Prem Ratan Dhan Payo’. But I will answer your question. My mother is Sushila Charak, my father is Salim Khan.”

Salman and Sonam Kapoor who are promoting their film ‘Prem Ratan Dhan Payo’ in every nook and corner of the city rightly hinted that the issue is best left alone where it is. Further, Salman expressed that he is not fully aware of the intolerant statement row and wouldn’t wish to comment on the same. However, the head strong diva Sonam interrupted and shared, “I should answer this question. Anything that is intolerant or that is said without complete evidence is unacceptable, so people just saying things in the name of religion, class, creed is disgusting and I think we should rest what we have to say at that point.”

Salman when asked to comment on SRK’s stance to return his award if needed promptly hinted that King Khan always gets him in trouble, he further added, ” He says something and then I have to come and (explain).”

Not happy with the promotions of the film going elsewhere, Salman said, “We should be talking about ‘Prem Ratan Dhan Payo’ as this is a film about love, tolerance, brother and sister relationship and I think Salman answered it really really well,” Sonam added. “We all are here, does it make a difference? Who is sitting here… does it matter to you? You asked me a question. It did not matter. We all are Indians.”

The two stars surely made a point indirectly by not dwelling deep into the already chaotic matter. Sooraj Barjatya’s film ‘Prem Ratan Dhan Payo’ stars Salman and Sonam in the main leads, the movie is all set to hit the screens on November 12th, 2015.