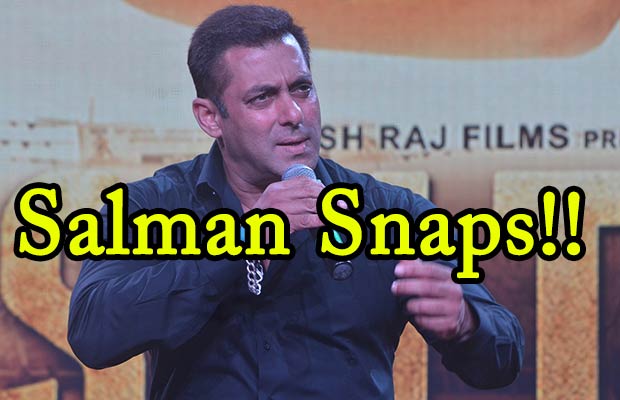 [tps_footer]Bollywood and fans of Salman Khan in particular have been salivating for close to decades now for the news of Salman Khan’s wedding plans. Be it when the ‘Bajrangi Bhaijaan’ claimed to be a virgin on ‘Koffee With Karan’ or when he broke up with girlfriend Katrina Kaif, the speculation has constantly been going on

The media has always been too close for comfort when it came to the topic of Salman’s lady love. But the thing is that he never has shunned or condemned the media and fan’s interest in his life. Salman has always been the kind of person who has been gracious enough to answer questions posed by journalists, give media appearances and even give interviews when appropriate.  So in such a scenario he seems like the kind of celebrity who understands the dainty connection between the media and their interference in his life.

Which is why it comes as a surprise to see that Salman recently snapped at a journalist in full public view for asking him an allegedly inappropriate question. The question posed by the journalist comes after Salman’s growing number of public appearances with rumored girlfriend Lulia Vantur. Not only have these appearances made fans speculate, but they have also cause gossip mills to go crazy. Speculations have led to rumors that say Salman will lose his perpetual bachelor tag by the end of the year.

When asked about his marriage plans by a journalist at a recently held event here is what Salman had to say.

“It is my thing. I don’t even know you; why should I tell you? I will get married when I want to. I will tell my family and declare it to my fans through a tweet or a Facebook post. It is between my fans and me.”

Ouch. Think Salman was being a bit too harsh? Well, we certainly think so![/tps_footer]