The trailer of Aamir Khan starrer movie Dangal had released yesterday and within a quick span of time, the people had mixed responses about the trailer. After sometime the hashtag #BoycottDangal became viral on Twitter as people wanted a ban on the movie.

The people wanted a ban as Aamir had earlier passed anti-national comments when he spoke about the rising intolerance in the country. Amidst all this tennis star took sometime and added a meme to the trending hashtag which demanded a ban on the film. 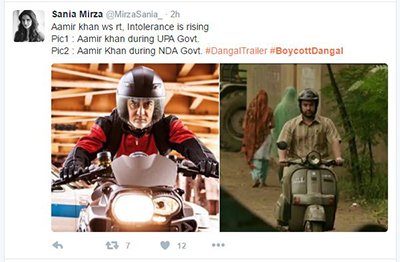 Twitter with a few snapshots from the past reminded Aamir khan about his conversations and about his tweets on intolerance where he mentioned that looking at the intolerance level he is scared about his family living in India.

Aamir‘s silence on the Uri attack and the debate on the ban of Pakistani artistes in Bollywood too was called out by Twitter users.