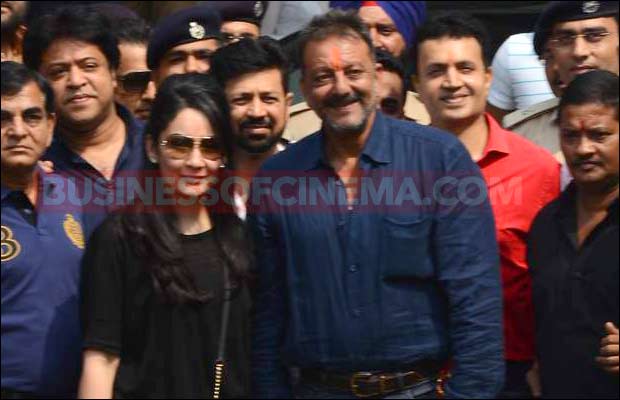 [tps_footer]On Thursday, when Sanjay Dutt was released from the Yerwada Jail in Pune after 23 years, it marked to end of a traumatic period for the actor & start of a new beginning. The 56-year-old ‘Munnabhai’ was released after having served his five-year sentence for possessing illegal arms in the March 12th, 1993, Mumbai serial bomb blasts case. As expected, the actor’s friends, family and fans were waiting with bated breath to welcome the ‘Khalnayak’. Not only did a popular eatery offer their signature dish ‘Chicken Sanju Baba’ for free, but his entire locality was decked for his homecoming.

When Sanju Baba reached his residence in Pali Hill, Mumbai, the entire Nargis Dutt Road was chock-a-bloc with the Khalnayak’s fans shouting, “Baba! Baba!” Dutt’s home-coming was nothing short of something that happens in movies. Close to 2000 fans were eagerly waiting to see him back in the real world and friends from the industry too came to welcome him home. Colleagues from the industry included director Raj Kumar Hirani, Siddharth Anand, Bunty Walia, Apoorva Lakhia, Shilpa Shetty , Raj Kundra and even Dutt’s brother-in-law Kumar Gaurav.

Amidst all the hustle and bustle and excitement, a source said that Sanjay Dutt seemed rather mellow. He admitted to the source that although he has earned his freedom, he still feels like he is on furlough. Apparently, Dutt still cannot believe he is a free man!

After a few hours of his home-coming, Dutt took time off for quick meetings with his new marketing team headed by producer Madhu Mantena. After this meeting, he got ready to attend press conference, where he charmed everybody. Apparently, using the word ‘jail’ to describe his prison stint is borbidden by the ‘Munnabhai’ star.

To top it all off, the source said that Sanjay Dutt would not throw a party to celebrate his freedom; he is very somber about the entire affair. His plans for the next 3 days include simply relaxing at his home soaking in his newly acquired freedom and spending time with his wife and kids.[/tps_footer]