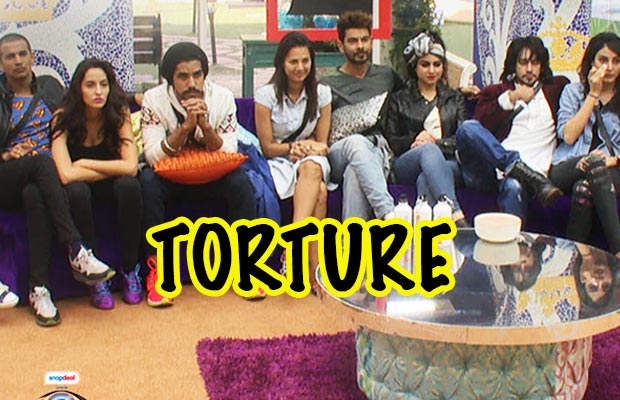 [tps_footer]After having fun time with Salman Khan and Shah Rukh Khan on the weekend episodes of Bigg Boss 9, it’s time for the housemates to get back with their new tasks. Just when the housemates were relieved thinking that there is no eviction for the week, Bigg Boss introduced a new task.

We exclusively reveal, this task was all about earning the lost money that the contestants had lost during the ‘nilami’ task at the initial stage of the game. This is for the second time that the housemates are getting chance to earn their lost money.

In the activity area of ‘Bigg Boss 9′ house, four big poles were placed and the contestants in jodis had to climb and hold themselves up on the pole. The jodis had to stick to the pole till last. It wasn’t easy as it sounds, when the jodis are on the pole, continuously water will be flowing in order to make them slip off from the pole.

The jodis for the task were, Keith Sequeira-Nora Fatehi, Rochelle Rao-Rishabh Sinha, Kishwer Merchant-Mandana Karimi and Priya Malik-Suyyash Rai. Gizele Thakral was the sanchalak of the task and Prince couldn’t be a part of the task as he was the captain of the house.

Though Prince couldn’t be a part of the task, he was given an important role. Prince was asked to sit in the confession room from where he can watch the task live. He had to guess which jodi will stay till last. Prince guessed Nora-Keith, but they didn’t stay till last. One by one all the jodis had quit the task, the only left in the task till last was jodi of Rochelle-Rishabh. As Prince guessed it wrong, the housemates lost the task.

We wait to catch the post task reactions of the housemates and the next high voltage drama!