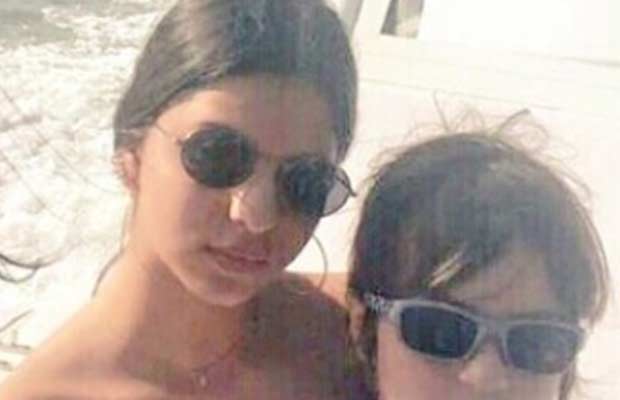 Suhana Khan has been snapped with younger brother AbRam Khan enjoying in a yacht!

The Bollywood actor Shah Rukh Khan indeed has a great stardom. But he too faces tough competition and some it is coming from his family itself. Just look at how famous his kids have become. From handsome Aryan to pretty Suhana Khan to cute little AbRam Khan, all three have their respective huge amount of fan following.

Suhana khan is in Mumbai and she is having the best of her time. Recently, she has been spotted with her younger brother AbRam. Both of them were seen enjoying together in a yacht. While Suhana was looking all pretty in her off-shoulder dress, AbRam was looking super cute sitting in her lap. What we also loved about their snap is how the two of them are posing with their black shades on. Cool swag. Isn’t it?

Lil #AbRamKhan With #SuhanaKhan & Shanaya Kapoor in Alibaug. Pic Of The Day ?❤

It was very recently that we had shown you all the snaps of Suhana Khan getting spotted with her buddies. The girl is in the town for a small holiday. And hence she went out on a movie outing with her friends Ananya Pandey, Chunky Pandey’s daughter and Shanaya Kapoor, Snajay Kapoor’s daughter. We had also shown you all how Suhana just tried to make an exit after realizing the presence of media.

Talking about Suhana Khan, she has a huge fan base on social media and all of her pictures always go viral online as soon as they come up. People are eagerly waiting for her to make her Bollywood debut. But as already made clear by her father Shah Rukh, she has to complete her education first before she could start working.