Shah Rukh Khan in Dear Zindagi plays a psychiatrist treating Alia and is quite elder to her in the movie. Remember the scene when he listens to her problems in the film while pouring eye drops in the eyes? Of Course you do! A similar kind of portrayal is seen in Raees too. Well! If you’ve watched the film and Raees’ trailer, then you must have seen the common link between the films.

You must have surely seen the trailer by now and of course, why not! This one trailer had been killing it among fans since a couple of months. After the trailer got released, fans noticed this similarity and that’s when it came into the news. 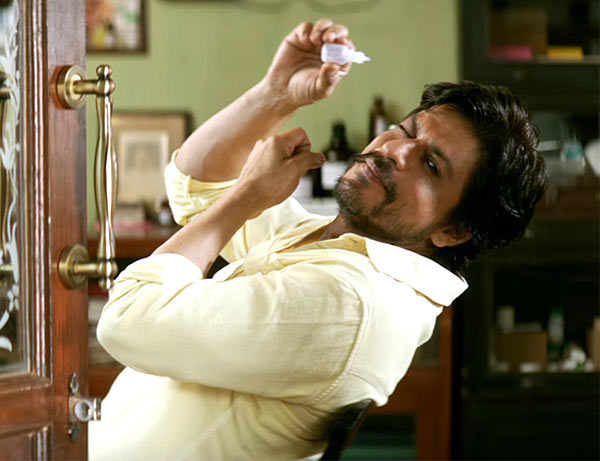 In Raees, Shah Rukh Khan is seen having a glimpse of Mahira Khan while pouring eye drops. Now talking about his current release, Dear Zindagi, Shah Rukh is administered doing the same while listening to Alia Bhatt. Gauri Shinde didn’t really explain as to why that scene was shown. Maybe that’s a portrayal of what happens to people with age.

Now we wonder what was shot first, Raees or Dear Zindagi? Or maybe, Shah Rukh got used to adapting the quirks in both the characters? Well! Whatever may be the story behind, we surely loved Shah Rukh as Jug in Dear Zindagi and of course, we can’t wait to watch him as Raees Alam in Raees.

Let’s try and find out why he pours eye drops in Raees then on January 25th.