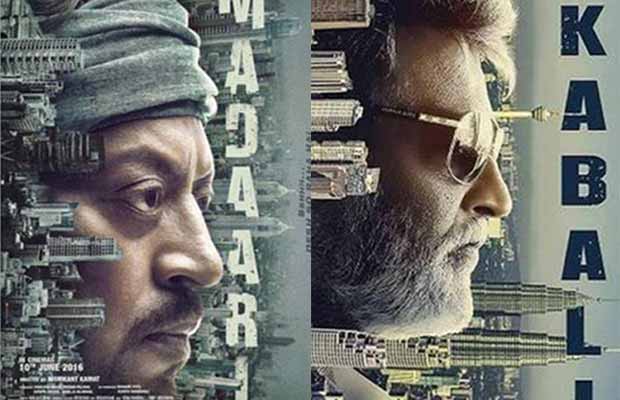 [tps_footer]South superstar Rajnikanth is ready with his next film titled ‘Kabali’, while Bollywood actor Irrfan Khan has geared up with the release of his next film ‘Madaari’.

Both the films are much-anticipated films of the year and have been a talk of the town since weeks for their amazing trailers and posters. Well, it seems the new posters of both the films are the fact that Indian filmmakers are no strangers to copying elements of other films.

Madaari actor Irrfan Khan says that south megastar Rajinikanth’s film “Kabali” has copied the poster of his film. But he even added saying that he has no problem with it and urged his fans to watch both the films.

While the actor was present at a mall in Mumbai for the promotion of his film, he was asked about the similarity between both the posters.

To which he replied saying, “Even I didn’t know that. We are small filmmakers, I saw that Rajinikanthji’s film stole the poster of our film. You see his film’s poster and see our film’s poster. No big deal about it. Watch his film and watch our film, too.”

While people are talking about the comparison between both the posters, Rajinikanth’s loyal fans have claimed that it’s a fan made poster and not the official one.

Nevertheless, all we can say is both the films are worth watching due to their strong storyline and amazing star cast.

Talking about Kabali, alongside Thalaivar, the film also stars Radhika Apte, Dhansika and Winston Chao. “Kabali,” is written and directed by Pa Ranjith and produced by Kalaipuli S Dhanu. The film is slated to release this year on July 15.

On the other hand, Madaari, which is directed by Nishikant Kamat, is based on the collapse of an under-construction metro bridge in Andheri, Mumbai that happened in September 2012.

The film stars Irrfan Khan and Jimmy Shergill in the lead roles and is slated to release on July 15.

Now that both the films are releasing on July 15, which one are you going to watch?