Bollywood actresses Kareena Kapoor Khan and Karisma Kapoor have to be sister goals! The two are always supporting each other and now we could possibly see the two acting on screen.

Kareena Kapoor and Karisma will be seen together in an ad film very soon. The duo was seen shooting for the same when they had a surprise visit from someone special on sets. It was none other than Kareen Kapoor Khan’s son Taimur!

The chubby boy was all smiles and was brought in to visit mommy Kareena and aunt Karisma on sets. Karisma Kapoor’s children Sameira and Kiaan were also present with them.

Karisma Kapoor shared a mirror selfies of the happy reunion with the Kapoor sisters and their kids from the sets. She captioned the picture saying, “We had a special visitor on our set yesterday ?#taimur#ourjaan❤️#ourbabies#ourlife#ourworld #familylove❤️❤️❤️

We had a special visitor on our set yesterday ?#taimur#ourjaan❤️#ourbabies#ourlife#ourworld#familylove❤️❤️❤️

Only recently Karisma Kapoor shared a beautiful picture of the two actresses posing for the camera with the caption, “Awesome day shooting with the sis ??? #somethingspecial #comingsoon?? #brandshoot 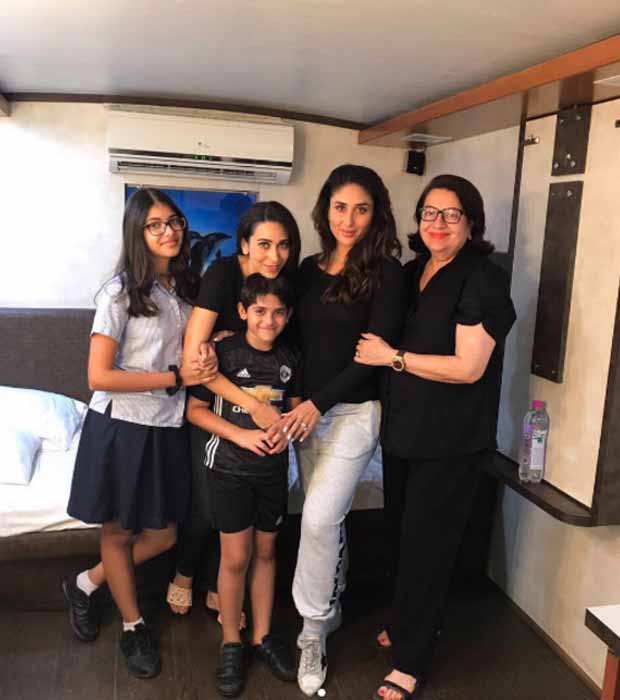 Kareena Kapoor is seen in a pink dress while older sister Karisma flaunts a baby blue dress and heels. She also followed it with a boomerang of them hugging with the caption, “Fun day at work ?#sistersforever?#loveyou”

The sisters were spotted with actress mother Babita and Karisma’s two children Sameira and Kiaan. The family decided to go all black with Sameia standing out in a lighter shade. They were busy shooting for an advertisement according to fan accounts.

Kareena Kapoor Khan and Karisma Kapoor were recently spotted at sister – in- law Soha Ali Khan’s baby shower. The sister duo was dressed to impress at the party as they posed for the cameras.

On the work front, Kareena Kapoor will be making her come back into Bollywood with ‘Veere Di Wedding’ after giving birth to son Taimur. She was spotted with producer Rhea Kapoor and co-stars Sonam Kapoor, Shikha Talsania and Swara Bhaskar at a script reading.

The actress had revealed that she was really excited for the film as it reflected a side of Kareena Kapoor. She added, “I’m possessive about my friends and this film reflects that side of me. It’s the story of four girls who attend my wedding and all the dhamaal that it involves. It showcases women and their emotions. It’s the right time to do this kind of film.”

We are excited to see how the two sisters Kareena Kapoor and Karisma Kapoor turn out in the new ad film.