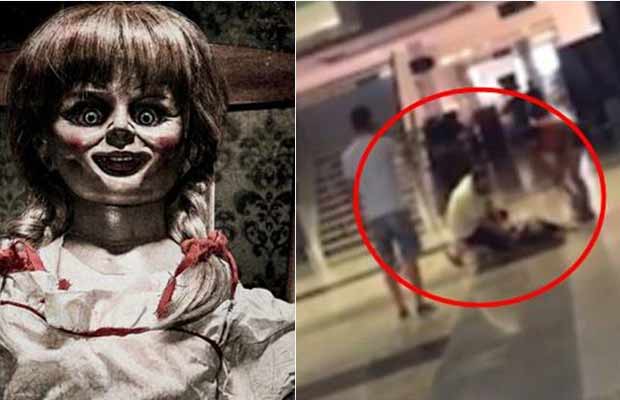 A woman in Brazil was rushed to hospital after she got scared for life while watching new horror film Annabelle: Creation at a cinema.

The viral video, which has been taken at a mall in Teresina, Brazil, sees a female lying on the floor and screaming uncontrollably. The people around her are seen trying to calm down the woman, who looks quite panicked apparently after watching the Horror film, Annabelle: Creation. Reports also suggest that she started punching herself in the face as she left the cinema at around midnight on Friday. Media reports state that the female started behaving weirdly at the scariest scene during the film when a devil appears.

A member of staff at the shopping center told Brazil’s UOL website: “We haven’t managed to find out exactly what happened or what caused this behaviour. What we know is that she was really very nervous and couldn’t herself explain what had happened.”

Annabelle 2 Creation is said to be the prequel of the Hollywood’s horror movie Annabelle that was released in the year 2014. Annabelle: Creation is a story about how several years after the tragic death of their little girl, a dollmaker and his wife welcome a nun and several girls from a shuttered orphanage into their home, soon becoming the target of the dollmaker’s possessed creation, Annabelle.

Watch the video that has gone viral on social media and has already received over two lacs views: