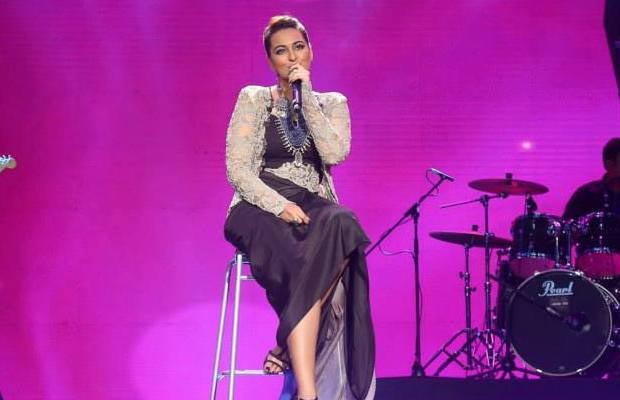 [tps_footer]Amazing actress Sonakshi Sinha is not only top notch when it comes to acting, but is also a pro when it comes to singing. The Dabangg actress Sonakshi has been garnering a large fan following since her debut. The actress who has given several hits with many actors is also venturing into singing. Sonakshi has already recorded her first ever single Ishqoholic. The actress has stepped into the world of singing.

Sonakshi Sinha made an impressive TV debut with the singing reality show Indian Idol Junior. The actress was seen on the judge’s panel and the audience loved her small screen presence. Many a times, Sonakshi Sinha has expressed her inclination towards singing and the diva is finally giving shape to the idea.

The new single which is also the debut of Sonakshi is composed by Meet Bros. The track is said to be a hip hop style one with a youth centric touch to it. The song will also have Sona rapping a few lines. The actress is surely head over heels for her debut and is also bragging about the same on the micro blogging site Twitter. The beautiful star posted, “Aaj mood Ishqoholic haiii…#SonaSings”

The song is still in its audio stage and the video for the same is yet to be shot. The track Ishqoholic is already trending amongst the fans on Twitter.

Sonakshi Sinha apart from her singing task is also tied up with the film ‘Force 2′ starring John Abraham. The talented diva will also be seen in the film ‘Akira’ along with Shatrughan Sinha and Amit Sadh. Well seems like, Sonakshi Sinha is already creating waves for her multi-talented personality.