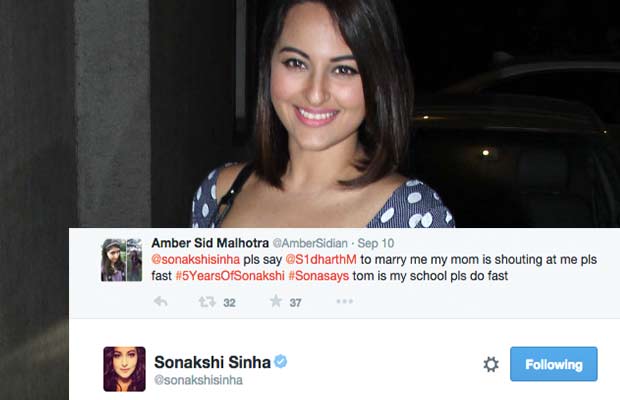 The head strong actress Sonakshi Sinha is active on her social media accounts. The actress who loves to speak her mind out has many a times been in the limelight for her posts on the micro blogging site Twitter. Once again, Sonakshi is gaining all the attention for something she did on Twitter.

Must say, Sidharth’s reply to Sonakshi was oh- so to the point. Well Sonakshi is not the only star who has played a cupid for her fan, superstar Shah Rukh Khan was also much in news for playing the role of a cupid to one of his fans.

On the work front, Sonakshi Sinha will soon be seen in the film ‘Akira’ helmed by A.R.Murugadoss. The beautiful actress will share screen space with Amit Sadh and Shatrughan Sinha in the film. Apart from ‘Akira’, Sonakshi is also roped in for ‘Force 2’.

Coming to actor Sidharth Malhotra, the actor will feature in the film ‘Kapoor & Sons Since 1921’. The film also features Alia Bhatt and Fawad Khan in lead roles apart from Sidharth. The talented actor is currently busy shooting for the film ‘Kal Jisne Dekha’ opposite Katrina Kaif.