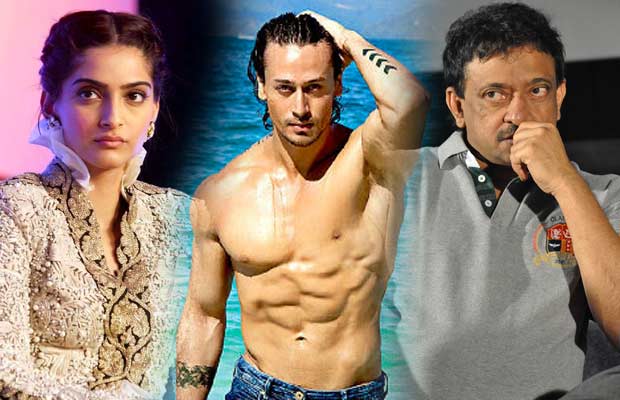 Sonam Kapoor has always stood up against and spoken about various woman empowerment issues like glass-ceiling effect and wage disparity in Bollywood. She is unabashed about her opinions and we love her for that. Recently filmmaker Ram Gopal Varma took a dig at Tiger Shroff saying that he should take lessons of “machoism” from his dad, Jackie and pose more like a man.

After a lash-out from Tiger’s sister and mother, RGV later went to clarify that he was just joking and meant no harm. And what felt even more uncalled for what the fact that he tweeted this on Tiger’s birthday. Though Tiger was not affected one bit by it, as claimed by his sister.

The glam diva of Bollywood Sonam Kapoor had a very interesting take on this controversy. She said that Tiger and everyone else should be happy that Ramu doesn’t like him. Wondering why she said that?

Read on for her full statement.

The ‘Neerja’ actor laughed and said, “(They should be happy that Ramu doesn’t like Tiger. Whoever Ramu doesn’t like, does very well. I am very happy. I like Tiger. He’s very cool and least bothered. He is very well-behaved and performs so beautifully. I saw him performing recently at an awards event and he did such a good job. It was a pleasure to watch. I just haven’t had the chance to watch his performance, except for his first film, but whatever I see him at events and parties, I find the way he conducts himself very dignified.”

We love how she retorted to Ramu in a very dignified way! Way to go lady!