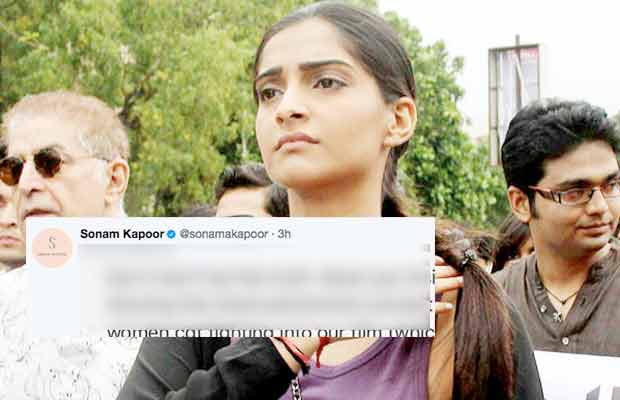 There had been reports of a catfight on the sets of the film Veere Di Wedding which stars Sonam Kapoor as one of the leads.

The Bollywood actress Sonam Kapoor is working on the film Veere Di Wedding. Along with her, the film also stars the actresses Kareena Kapoor Khan, Swara Bhaskar and Shikha Talsania.

Lately, there had been rumours doing the rounds of media that an alleged catfight took place on the sets of the film. The reports also suggested that due to the same, the schedule of the shoot was running two days late.

The ‘frustrating’ reports compelled the actress Sonam Kapoor to issue an official statement so as to clear all such rumours.

She took to the social networking site Twitter to share a picture containing her statement. It reads, “Dear websites, you can out as many ‘blind items’ as you like putting women against each other. It may get you clicks but it won’t be the truth. Must you insist on shoving this tired patriarchal concept of women cat fighting into our film (which is not about a road trip) as if grown, intelligent women have nothing better to do.”

She also added on saying, “We will continue to be actual friends and try and make a kick a*s movie and prove that women can work with each other, get along and have a blast.Because we can, and we are and we will continue to. And on schedule. Please keep in mind how outdated, irresponsible and harmful your narrative is and frustrating for a culture of women who actually want to work together. There is no place for it anymore.”

The first schedule of the film has been completed in Delhi. Sonam along with her sister Rhea Kapoor, who also happens to be the producer of Veere Di Wedding, has returned to town to celebrate Diwali with her family. Kareena Kapoor Khan also came back to Mumbai after the Delhi schedule with her son Taimur Ali Khan.