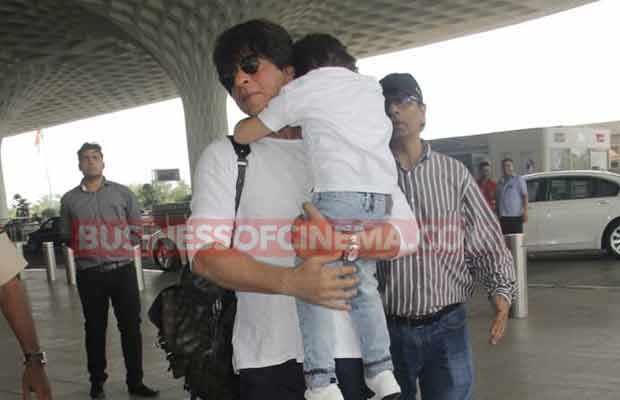 Shah Rukh Khan was spotted with his adorable son AbRam Khan at the airport!

AbRam is the youngest member of the Khan family. Maybe this the reason why he is so much pampered by everyone including the Bollywood actor Shah Rukh Khan. We have seen the lovable bond of the father-son duo on several occasions.

And it was today only when we spotted them again. Shah Rukh Khan was snapped with his adorable son AbRam at the Mumbai airport. While the son looked a bit uncomfortable seeing the shutterbugs, the protective father lifted him up in his arms.

It was yesterday only when we reported to you all how Shah Rukh Khan gave a bang on reply on the old rumours of AbRam being Aryan’s love child. SRK said, “Four years asgo, my lovely wife Gauri and me decided to have a third child. It was claimed on the net that this child was the love child of our first child (Aryan Khan) who was 15 years old. Apparently, he had sowed his wild oats with a girl while driving his car in Romania. And yeah there was a fake video to go with it. And we were so disturbed as a family. My son who is 19 now, even when you say hello to him he says, ‘But bro, I didn’t even have a European driving license.”

Shah Rukh Khan was last seen in Raees. He will be next working with Anushka Sharma in Imtiaz Ali’s untitled project.