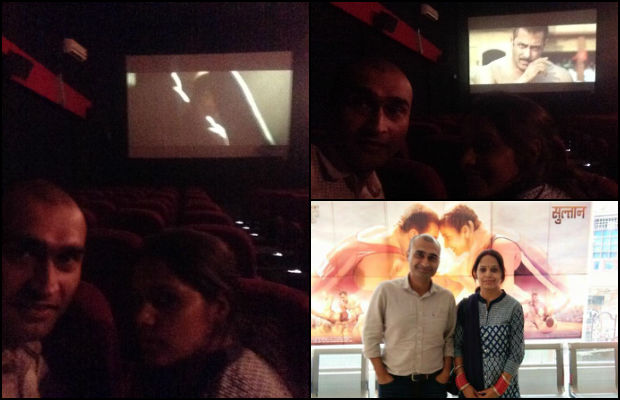 [tps_footer]Salman Khan’s Sultan mania doesn’t seem to take a wait. Since the film has released on July 6, Salman Khan and Anushka starrer Sultan is getting a terrific response from all over the world. The film turned out to be a huge craze among the audience that a man from Himachal Pradesh booked the entire 120-seat ARV Cinemas in Gurukul Mall, a day before the release of the film. Yes, you heard that right and the reason behind it is too surprising!

Shankar Musafir’s wife Geetanjali is a very big fan of Salman and to please his wife, he booked an entire screen of the cinema hall, which was a big surprise for his wife. According to reports, Musafir, an alumnus of Delhi’s Jawaharlal Nehru University, said that during Bajrangi Bhaijaan his wife had asked him to get five tickets for the movie but he wasn’t able to arrange. So this time, he surprised his wife Geetanjali by booking the whole 120 seat screen. Now that’s crazy!

In fact, the director of the mall was also surprised when he saw the man, who booked 120 tickets arrived only with his wife to watch the movie. He expected that he will come with 120 people, but it turned out to be something else.

Well, this man has set the bar too high for other husbands in the world by doing such crazy things. He even posted pictures of him and his wife on Facebook with a caption, “Being ‘sharaabi’…Bachchan style Booked the entire theatre for Gitanjali, my wife, who is a great fan of Salman. Sultan-First day first show…full house.”[/tps_footer]