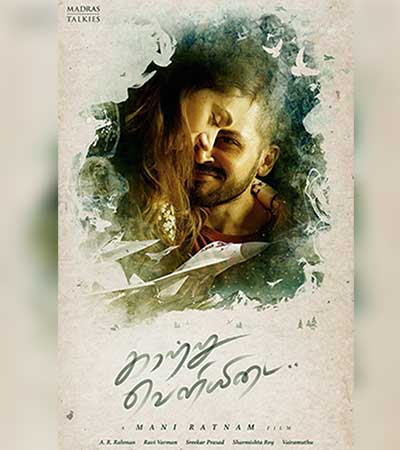 [tps_footer]Mani Ratnam is ready to start his upcoming romantic film ‘Kaatru Veliyidai’. The film stars actors Aditi Rao Hydari and Karthi in lead roles. The first look of the film has released and is already creating positive rounds amongst the masses.

Helmed by Mani Ratnam the film will also feature Rj Balaji in an integral role. The poster of the film is drenched in romance. Aditi and Karthi are nailing their chemistry by all means. The first look of ‘Kaatru Veliyidai’ sees Aditi Rao Hydari and Karthi in an adorable frame. The backdrop of the poster is filled with doves and a plane.

Reportedly, Karthi will play a pilot in the film. The film is an out and out romantic saga, wherein Karthi’s character will fall in love with Aditi’s character. The poster of the film speaks volumes of creativity with doves and a plane. The first glimpse looks more like a stolen frame and is pleasing to the eyes.

The cherry on the cake is that the music of the film will be given by A R Rahman. The epic combo of Mani Ratnam and A R Rahman is nothing short than perfection.

‘Kaatru Veliyidai’ will be produced under Mani Ratnam’s home production Madras Talkies.  The film will commence with its shooting schedule from today. ‘Kaatru Veliyidai’ is scheduled to release by this year end.[/tps_footer]