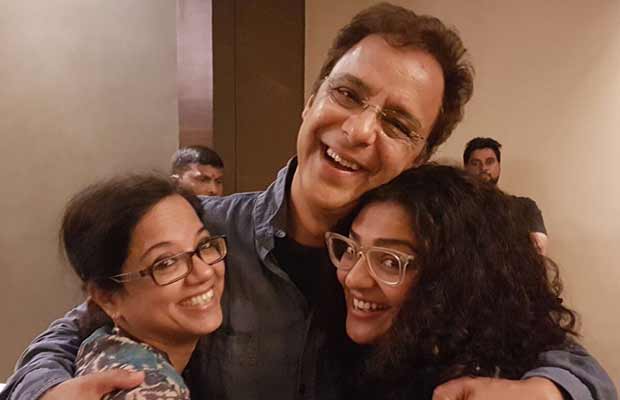 Qarib Qarib Singlle is all set to hit the screens tomorrow, but before the audience could enjoy this unusual tale of romance the makers of the movie held a special screening for their friends and family.

The QQS team collaborated with an online dating application and kept a special preview screening with the winners of the contest through the application. Simultaneously the makers also arranged a screening for their friends and family as well. Everyone who saw the film were all praise for it, However, filmaker Vidhu Vinod Chopra’s response came in like a pleasant surprise. The film maker hugged the team as he fell short of words to praise the film.

The national award winning actor showcases the Irrfan Khan style romance in yet another content driven film after Hindi Medium. Parvathy who has served the Indian film industry with her strong performances in the Malayalam, Tamil and Kannada films for almost a decade will make her Bollywood debut with ‘Qarib Qarib Singlle’. The film showcases the breezy romance of the unusual and fresh pairing of Irrfan with Parvathy.

The story promises to connect with singe people and even those who have found their partners through online dating platforms. The relativity of the content is probably one of the reasons why the trailer has struck a chord with the audience.

The songs from the film give us intriguing insights into the frictional relationship of Yogi and Jaya. Shot on the backdrop of picturesque locations the film proves to be a visual delight.

The bring-your-brain-in-theater romantic comedy is backed by Zee Studios who have earlier supported content films like Mom, Sairat, Natasamrat amongst others.

‘Qarib Qarib Singlle’ is garnering a lot of attention for its unusual pairing and quirky content. The trailer has received appreciation from the audience for its unusual storyline promising a joy-ride. The posters have attracted eye-balls for its taglines which is creating curiosity amongst all.