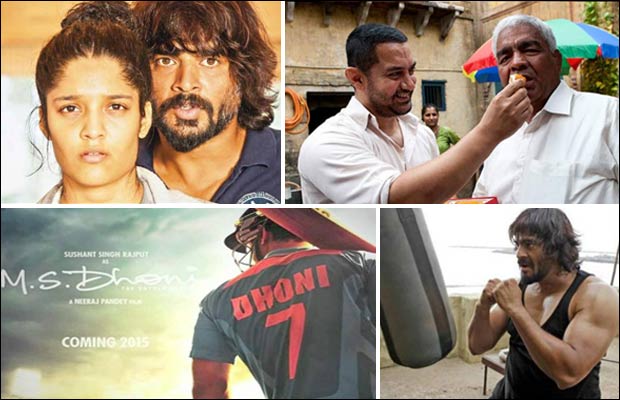 [tps_footer]In Bollywood, sports-based films have never had too many takers. Over the years, only a few such movies, like Awwal Number (1990), Jo Jeeta Wohi Sikandar (1992), Lagaan (2001) and Chak De! India (2007), have managed to hit the big screen. But the last few years have witnessed a shift, with films like Bhaag Milkha Bhaag (2013) and Mary Kom (2014) hitting the bullseye. In fact, 2016 will see a slew of sports-based stories on the big screen.

Salman Khan will be seen wrestling and trying out mixed martial arts in director Ali Abbas Zafar’s Sultan. Aamir Khan will play ex-wrestler Mahavir Singh Phogat in director Nitesh Tiwari’s Dangal, which is based on the struggles Phogat had to face to train his daughters in wrestling. Also, cricketer Mahendra Singh Dhoni’s life will be brought to the silver screen by Sushant Singh Rajput, in director Neeraj Pandey’s biopic on the ODI Indian skipper. On the other hand, R Madhavan stars in Saala Khadoos, a sports drama revolving around boxing.

“Earlier, film-makers usually made movies that were considered safe, like love stories, action films, etc. Also, most of the sports-based films that were attempted in the earlier decades didn’t do well, so no one ventured into that territory for many years. Now is a good time as far as the variety in plots is concerned, because film-makers are trying different kinds of stories. I’m glad that more sports films are now being made in India,” says film-maker Rajkumar Hirani, who has produced SK. He adds, “Sports films are usually about the triumph of an underdog, and they make you feel good. Such movies are happy films.”

Also, in queue is the biopic on former Indian captain Mohammed Azharuddin, starring Emraan Hashmi in the lead. It is being directed by Anthony D’Souza. A film on shuttler Saina Nehwal is also in the pipeline; it will be directed by Amole Gupte. Biopics on personalities like wrestler Gama Pehalwan (to be directed by Parmeet Sethi), footballer Sibdas Bhaduri (to be helmed by Shoojit Sircar), Dhyan Chand (to be made by Karan Johar) and hockey player Sandeep Singh (to be made by Chitrangda Singh) are being planned too.

“Sports have always captured the imagination of our nation. With time, India has seen the emergence of more and more sports icons from different fields. It’s not just their achievements, but also their struggles, which make their journeys fascinating and inspiring,” says Tiwari.

Trade analyst Taran Adarsh feels that the actors’ desire to do more challenging roles has also spurred this trend. “Despite being a sports-loving nation, unfortunately, we haven’t generously experimented with sports as a theme in our films. But now, actors want to experiment with fresher themes and sports provide a gripping backdrop. It’s great that some of the top names in Bollywood are part of such films,” he says.

On the other hand, exhibitor-distributor Akshaye Rathi feels that the success of BMB and MK has “tilted the scales” in the favour of such movies. “Since we have been watching these sports or hearing about these many sports personalities since childhood, the sheer connect with such films is immediate and very strong,” he says.[/tps_footer]