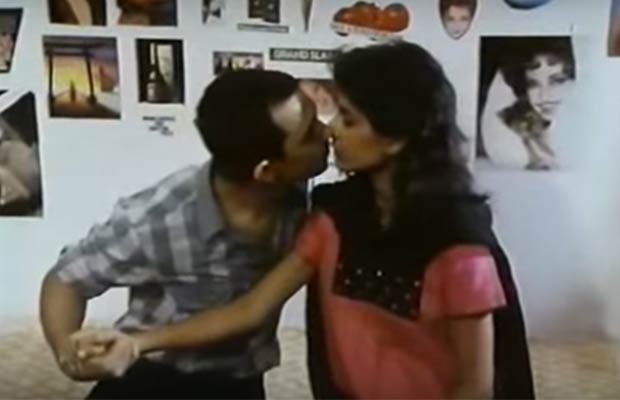 [tps_footer]Aamir Khan is known as Mr. Perfectionist. But he has owned this title over past years and of course due to his acting skills. Once upon a time, he was just a normal actor with many flaws, but practice and discipline have made him a perfectionist. The proof of his imperfection is the kissing scene from his first film. No, we are not talking about Juhi Chawla starrer Qayamat Se Qayamat Tak, but Ketan Mehta’s college project Holi.

When Raja Hindustani had released, people had created an issue when Aamir had kissed Karisma Kapoor. But that kiss was much better than his first kiss. The scene for his first kiss goes like this, the scene features Aamir as a college student who secretly sneaks in a girl in his room. The two sit there staring at each other followed by a little hand holding. And finally, the actor gathers the courage to place a kiss on the actress’ lips. And boy to make things more awkward…a friend of Aamir’s character starts knocking on the door. The lady quickly hides in a wardrobe, but much to her misfortune, the friend enters the room and goes straight to open the wardrobe door.

While the confused Aamir, his mannerisms, and the situations make the scene pretty awkward, don’t forget to notice the brilliance of this shot. The three-minute scene is entirely shot in one take. Don’t believe us, then watch this 3-minute film now![/tps_footer]