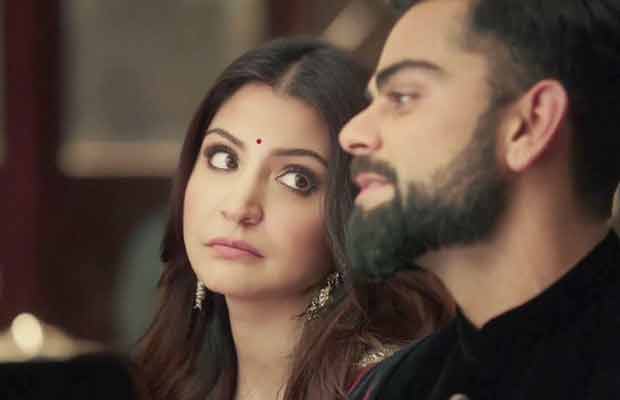 Anushka Sharma and Virat Kohli have been featured together in a new TV commercial.

The Bollywood actress Anushka Sharma and the Indian cricketer Virat Kohli make one of the cutest celeb couples. While the two of them were very shy about their relationship in the beginning, now they do not hesitate in talking about each other on public platforms. They even make public appearances together and express their love out in open.
It was a few days back only that everyone got to know about the cute nickname that Kohli has given to Anushka. While talking to Aamir Khan on the Secret Superstar chat show, he had termed the actress as Nushkie.

Also, it was very recently that we had shown you all a still of the lovely couple from a TV commercial. And now the video is out on YouTube. They look absolutely adorable together. In the ad, looking at a couple getting married, while Anushka wonders what vows they must be taking, Virat takes a vow that he would cook for his lady 15 days in a month.

That is when the two of them start making promises to each other and their modern days wedding vows are just so cute!

Anushka Sharma has been roped in as the brand ambassador of Mohey, from the house of Manyavar. She will promote the brand which deals in ethnic wears for women including sarees, lehengas, gowns and suits. The commercial has been shot for same.

Their love story had started when they had shot together for a TV commercial for a shampoo brand. It was back in the year 2013 and everyone had loved their jodi. And now the duo is coming back together for another brand endorsement and they look so much in love!

Check out the video here…