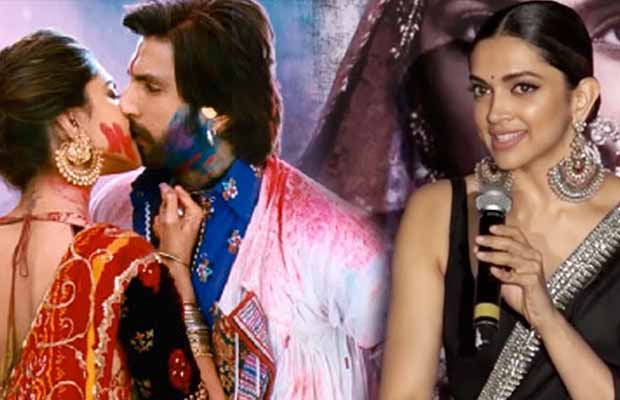 Deepika Padukone reacts on not having lovemaking scenes with Ranveer Singh in Padmavati.

Ranveer Singh and Deepika Padukone make one of the hottest couples on and off screen. The two have impressed the audience with their sizzling chemistry onscreen. They have had scenes together in their last films Bajirao Mastani and Ram-Leela. However, in their upcoming film Padmavati, Ranveer and Deepika will be having no lovemaking scenes. As history bears testimony to the fact that Padukone’s character of Rani Padmini and Singh’s character of Alauddin Khilji were not romantically involved.

Ranveer and Deepika will not be seen romancing each other on the big screen this time. Their chemistry remained missing from the recently released trailer of Sanjay Leela Bhansali’s Padmavati. Also, Shri Rajput Karni Sena had alleged that Bhansali has distorted historical facts in Padmavati by placing Ranveer and Deepika’s characters in a romantic relationship. This had created quite a stir and a huge ruckus for the makers of the film. However, both Ranveer and Deepika denied the rumours and clarified that there is no distortion of history in the film’s narrative.

Recently, at the 3D trailer launch of Padmavati, Deepika Padukone was asked to comment on not having lovemaking scenes with Ranveer n the film and that might disappoint their fans.

Watch the video below to know how Deepika reacted to this question: