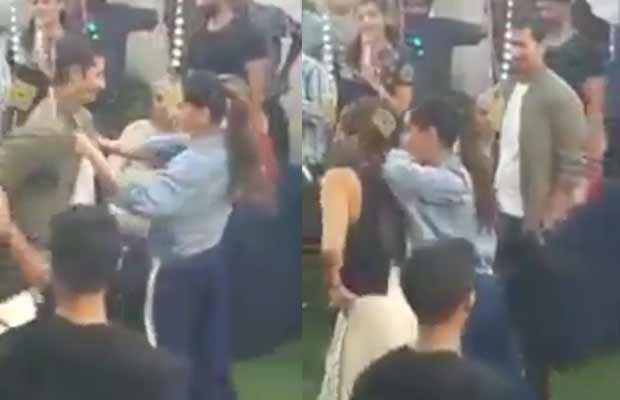 A video has gone viral from the sets of the film Veere Di Wedding which sees Kareena Kapoor Khan dancing with co-stars Sonam Kapoor and Summet Vyas!

The Bollywood actress Kareena Kapoor Khan is going to make her comeback in the industry after her pregnancy. She is going to be seen in the film Veere Di Wedding, which is currently on floors. The film also stars Sonam Kapoor, Swara Bhaskar, Shikha Talsania and Sumeet Vyas.

The film has attracted many eyeballs after its first poster was released. With all the pretty girls dancing and enjoying themselves in sherwanis and pagdis, the poster looks very quirky.

Some days back, a few pictures from the sets of the film had leaked which saw Kareena and Sumeet hugging each other. The pictures made a hint that the two of them might be seen as pair in the film. And now a few videos have also leaked from the sets which see the actress grooving with her co-stars.

From Veere di wedding Look at bebo ???? This film inshallah will be the most beautiful and gorgeous film in 2018 ….???????❤️ . . . . @poonamdamania #sama from #palestine ❤️✋? #fangirl #kareenakapoor #kareenakapoorkhan #bebo #vdw #veerediwedding

In the leaked video, we can see the setup of a party, probably a wedding party. The video shows Kareena practicing her dance moves, first with Sonam Kapoor and then with Summet Vyas. Well, if they have really been paired opposite each other in the film, then it will be interesting to see them together as it is a fresh Jodi!

Summet Vyas became famous after he starred in the web weries Permanent Roommates, which is quite popular. Apart from this film, he is also sharing screen spaces with Kalki Koechlin in the film Ribbon.

Talking about the film Veere Di Wedding, it is going to be helmed by Shashank Ghosh and produced by Sonam’s sister Rhea Kapoor. It is slated to release on May 28, the next year.