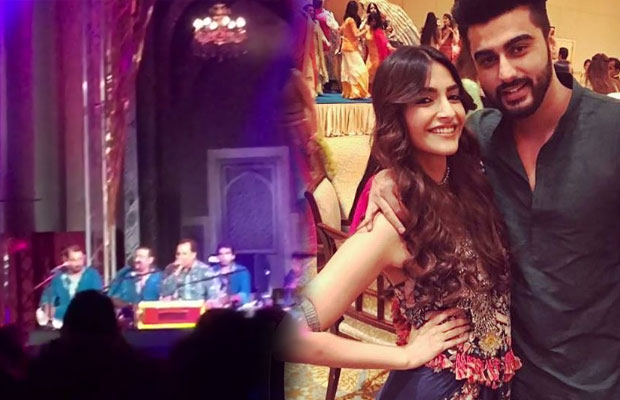 Last year, the entire nation was facing the heat with the tension between India and its neighbouring country after Uri attack in Jammu and Kashmir. Banning Pakistani actors from working in India has been a heated debate in Bollywood after the shocking Uri terror attack last year, in which Indian 18 soldiers lost their lives. The tension between the two countries had also trapped Bollywood celebrities with lots of pressure from the political parties on not working with Pakistani stars. Pakistani stars Fawad Khan, Mahira Khan, Ali Zafar, Rahat Fateh Ali Khan and few others were immediately asked to leave the country. And the ban still continues!

Well, recently Sonam Kapoor and her family visited Abu Dhabi to attend the wedding of Akshay Marwah with Aashika Relan. (Akshay is Anil Kapoor’s sister’s son and actor Mohit Marwaah’s real brother). Cousins Sonam Kapoor, Arjun Kapoor, Rhea Kapoor, Harshwardhan Kapoor and others from the Kapoor family were seen having a gala time at the grand family wedding ceremonies. The young brigade was seen sharing videos and photos of them from the wedding and they looked every bit of royal.

Well, we also came across some videos on the social media, which shows Pakistani artiste Rahat Fateh Ali Khan performing at the wedding. Yes, a ghazal night by the singer was hosted by the Kapoor family. Well, it seems as the ban has been imposed in India, the stars are going to some other countries to enjoy the art. Of course, the ban is in India and not in UAE.

Rahat Fateh Ali Khan crooned to some of his hit numbers like Main Jaa Rahoon, Afreen and many more. Check out videos below:

Best time of my life ! Salute to the legend #rahatfatehalikhan #akmash

Also, check some amazing pictures of Sonam Kapoor from the wedding and she looks drop dead gorgeous.

Arjun Kapoor also shared some stunning photos of him from his brother’s wedding!

The June siblings !!! @sonamkapoor and me at the #akmash mehendi let the madness begin !!!

Dance like no one s watching !!! #akmash was a blast… old friends new memories & the big fat Punjabi wedding..One of my brothers got married today I wonder which one of us is next ??????