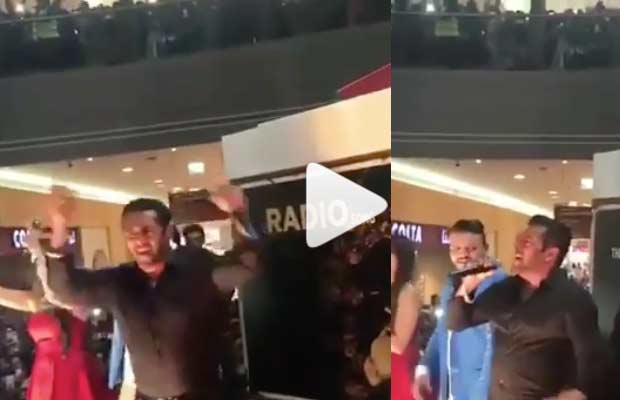 Fans cheer up as Salman Khan sings “The Radio Song” in Dubai.

Bollywood superstar Salman Khan launched “ The Radio Song” from his much-talked upcoming film Tubelight, yesterday in Dubai. Salman along with director Kabir Khan and brother Sohail Khan had an amazing time in Dubai as they launched the first track from the film.

To everyone’s surprise, Salman Khan also sang the song amid thousand fans at a mall in Dubai. The video of fans cheering Salman Khan is sure to give you goosebumps.The actor looked every bit of energetic and also made sure that the whole team of Tubelight dances to the tunes of celebrated song, “Radio”.

The song, which has been sung by Kamaal Khan, is currently a talk of the town. Talking about the song at the launch event, Salman Khan said he was proud of the way Indian films included songs and dance. “Hollywood makes their films on one track, but in our films, there’s always music, emotion, drama, heroism and songs are a part of our culture. We don’t want that culture of songs to be separated and I won’t let it happen.”

Talking about Oscar-winner La La Land, the actor said that it was driven by music with “its 200 songs at least”.

Director Kabir Khan, at the Tubelight song launch, also shared that he always got into a debate with Salman Khan over some or other issue while filming. “We had lots of issues on Ek Tha Tiger and we used to debate and discuss as we come from different sensibilities. I sometimes go too real and Salman pulls me towards the mainstream. Sometimes I try and insert more logic into the scenes,” Kabir Khan said.

Catch the video of Salman Khan singing Radio song amid thousands of fan in Dubai: