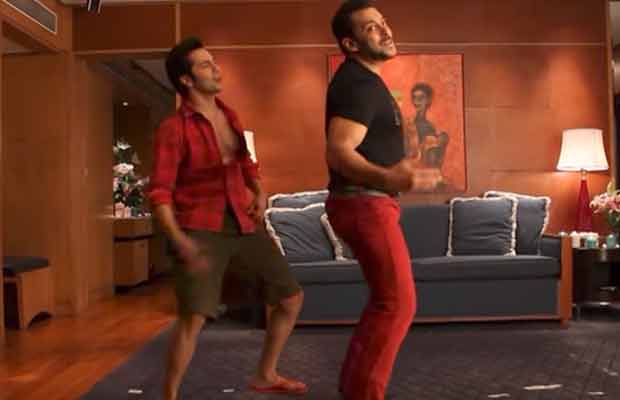 Sajid Nadiadwala’s ‘Judwaa 2’ is the reboot of the 1997 Salman Khan starrer Judwaa which is currently ruling the box office. The makers have shared a behind the scenes video of the scene where Judwaa 1 Salman Khan meets Judwaa 2 Varun Dhawan.

The original Judwaa’s Prem and Raja portrayed by Salman Khan treated their fans with a special appearance in the remake.

‘Chalti Hai Kya 9 se 12’ is a chart buster which still is the life of every party. The evergreen track stays etched i the hearts of every 90’s kid. Varun Dhawan has recreated the magic again in Sajid Nadiadwala’s ‘Judwaa 2’.

The BTS showcases the duo shake a leg together on the iconic song which has created a rage amongst the audience. We can’t get over them dancing to the beats of the song. It was a double dose of entertainment for their fans.

The BTS video showcases the senior Judwaa Salman Khan teaching the junior Varun Dhawan to follow his steps and it is definitely a treat to watch them together.

Salmaan Khan feels nostalgic on the sets of Judwaa 2 while shooting for the cameo. He says, “I feel like yesterday man. It feels the same.”.

We see David Dhawan guiding the original Judwaa just like before.”This looks much better than the first film. He (David Dhawan) has learned” laughs off Salmaan Khan.

Varun Dhawan questions “Whose written the dialogues for Judwaa 1?” to which director David Dhawan replies “Quite a lot of heads, which we have used in this picture also!” “Boondi ke ladoo” Sajid Nadiadwala and David Dhawan imitate excitedly.

The family entertainer has been winning hearts all over with its high on humor scenes and entertaining performances.

Producer Sajid Nadiadwala treated the audience with one of the most memorable family entertainers with the 1997 Salman Khan starrer ‘Judwaa’. After 20 years the filmmaker has successfully recreated the magic of the blockbuster film with Varun Dhawan slipping into the shoes of Salman Khan in ‘Judwaa 2’.

The comedy film has Varun Dhawan bringing back to celluloid the iconic characters Prem and Raja, while Jacqueline Fernandez and Taapsee Pannu slip into the shoes of Karisma Kapoor and Rambha respectively.

‘Judwaa 2’ has been garnering huge word of mouth touting it to be a great family entertainer. Varun Dhawan’s much awaited release of the year is breaking records with ‘Judwaa 2’ marking the actor’s second hit collaboration with Sajid Nadiadwala’s NGE Productions.

Sajid Nadiadwala’s ‘Judwaa 2’ directed by David Dhawan has released all over and is winning hearts.