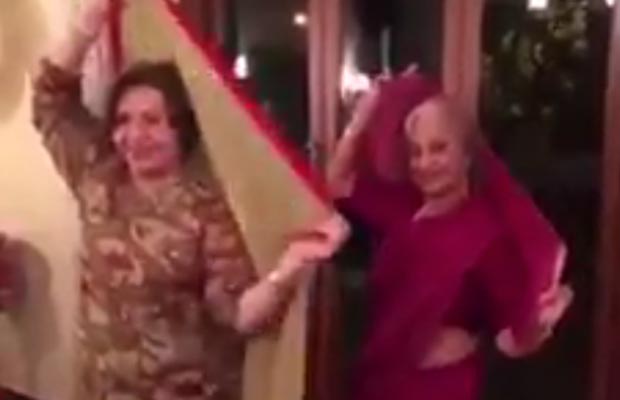 Since the title track of Salman Khan’s Prem Ratan Dhan Payo has been released, each and every one is going crazy about it and moreover anything even Bollywood is grooving to the same.

Recently we saw, Shilpa Shetty, Raveena Tandon, Sridevi, Arbaaz Khan, Amrita Arora and others dancing on the tunes of Prem Ratan Dhan Payo. While imitating Sonam Kapoor’s steps from the song, Salman Khan’s mother Helen and actress Waheeda Rehman are also shaking their legs on the tunes of the same song.

PRDP Dubsmash has already gone viral and the latest to follow are the two favourite ladies of Salman, mother Helen and actress Waheeda Rehman. Both the beautiful ladies are enjoying their dancing and moreover anything they are graceful like always.

Also Read: We Bet You Must Have Not Seen These 13 Unseen Pictures Of Salman Khan And Shah Rukh Khan!

Salman Khan, who has geared up for the promotions of the film, took to his twitter handle to share this Dubsmash video. He tweeted saying, “Prem Ratan Dhan Payo performed by the 2 most beautiful women.”

Talking about the film, the songs of the film have been colorful yet beautiful with soulful music. Salman Khan will be seen as the quintessential Prem once again in PRDP that audiences have loved and treasured in their hearts. Directed by Sooraj Barjatya, the film also features actor Neil Nitin Mukesh, Anupam Kher, Swara Bhaskar and Sonam Kapoor. The film will hit the theatres on November 12, 2015.