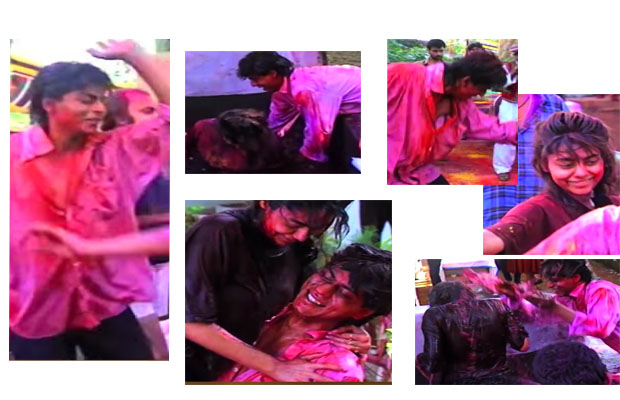 A video from director Subhash Ghai’s Holi party in 1995 is going viral. Shah Rukh Khan and wife Gauri Khan are seen having a blast at the party. Shah Rukh and Gauri are looking like two children playing in a pool of coloured water. They are having so much fun splashing water at each other. They don’t seem to bother about anything and are seen enjoying and dancing their hearts out.

On the work front, SRK was last seen in Raees, which also starred Nawazuddin Siddiqui and Mahira Khan that released in January this year. He has also shot for a cameo role in Salman Khan’s upcoming film Tubelight.

Other than that, the actor will be next seen in Imtiaz Ali’s untitled film with Anushka Sharma, and Aanand L Rai’s next, where he will play a dwarf.

Shah Rukh Khan also took to Twitter to wish his fans on Holi. He wrote, Happy Holi to everyone. Be happy and high on life.

Happy Holi to everyone. Be happy and high on life. pic.twitter.com/qL0eR9Uqif