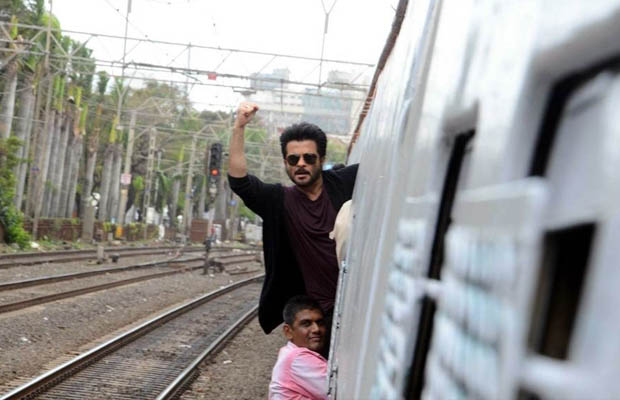 Veteran actor Anil Kapoor was spotted yesterday going all out for the promotions of his upcoming show ‘24’.

The promotional stint made the actor engage in such an act that he never knew would land him in legal trouble. Apparently, Anil Kapoor was seen leaning out of a suburban local train for the promotions.

The act unsettled the railway officials who made the Western Railway slap a legal notice on the actor and the production house Messrs. Market Men Consumers & Events Pvt Ltd asking for an explanation behind the risky act performed by the actor.

When an official of the Western Railway was approached, he said, “Inspite of the terms and conditions to adhere strictly to safety and security during the shoot, Anil Kapoor allegedly seems to be leaning from the footboard of a local train during a promo shoot on July 14.”

The journey undertaken by Anil in the local train started from Churchgate Station and was for his forthcoming action-drama the-series “24: Season 2”. On the journey, Anil was also accompanied by a huge number of fans and media persons.

The Railway Authorities explained that the stunts performed were very risky as young citizens could get inspired by the actor and could try performing them which might lead to accidents and even death. In fact, the Railway authorities have been trying since long through various campaigns to discourage the people from performing such acts and also explaining them the hazardous results of doing so.

Talking about ‘24’, the show is an adaption of the popular American series in the same name and will mark Anil’s return to the small screen. The show will be aired on Colors channel from July 23.