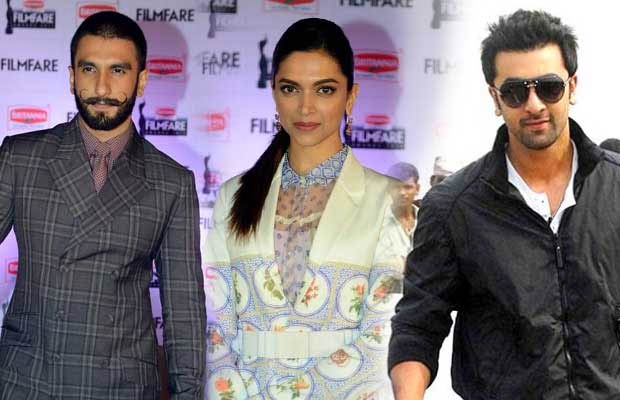 We showed you Ranbir Kapoor and Ranveer Singh grooving to each other’s songs last Saturday. The star-studded affair at Bandra was indeed a party to reminisce as it is not too often when stars let their guard loose and be nothing but their own selves in public. However, the show-stopper act of the party was the bromance shared between Ranveer Singh and Ranbir Kapoor.

The actors looked like a rab ne bana di jodi grooving with each other like long lost brothers. Actress Deepika Padukone was seen standing by the duo, clapping and cheering for them. Interestingly, Deepika Padukone is dating Ranveer Singh and is Ranbir Kapoor’s ex-girlfriend.

To add to the already rocketing drama, the two men went down on their knees and skid towards the beauty with spread embrace making the actress go all pink blushing.

Ranveer Singh went on to carry Ranbir in his arms and dance the night away.

However, much to the dismay of ex-beau Ranbir Kapoor, Deepika left the venue with boyfriend Ranveer.

A photographer present at the venue went on to ask Singh if he met Kapoor at the party inside to which Ranveer quipped, “Oh yes, but look who’s going home with the girl?”

We tried reaching the actor for his comments on this incident however he didn’t revert till this story got filed. However, we can’t deny the truth that Ranveer won the girl!