The shocking new all of us woke up today has still left us numb and in denial. It is unbelievable that actor Om Puri, who entertained us in the movies for nearly 45 years, passed away this morning. The 66-year old actor was so hearty and healthy until he suffered a cardiac arrest.

The film fraternity has been pouring in their condolences and expressing shock and disbelief at the tragic turn of events. Anupam Kher, a close friend of Puri’s tweeted “Seeing him lying on his bed looking so calm can’t believe that one of our greatest actors #OmPuri is no more.”

What a lot of us didn’t know about, was the fact that Om Puri was a part of Salman Khan’s Tubelight. Yes, director Kabir Khan just tweeted a heartfelt tweet speaking about the times spent with him on the sets of Tubelight.

“Omji… u were laughing with us on set jst a few days ago! We have lost one of the greatest actor & the warmest person in the film industry. Omji… I will miss that warm tight hug that you gave me every morning on set. Khudahafiz sir… you were the best!” 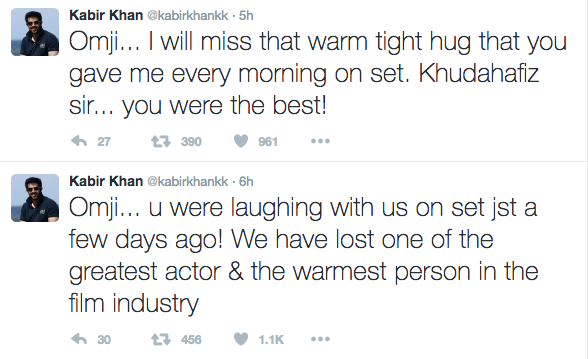 The loss feels rather unbelievable if you have been working with a person one day and next day they are no more. Wonder how everyone on sets of Tubelight might be going through.