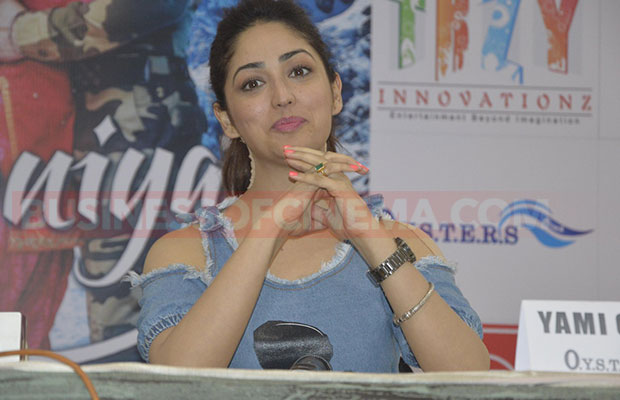 Yami Gautam is currently at the peak of her career. The actress had 4 releases this year- 1 Tamil and 3 Bollywood. She also has been working on many TV commercials and has quite a number of endorsements in her kitty.

Yami was spotted today afternoon at the launch of Anita Dongre’s new store. The beautiful actress endorsed the wedding collection by the designer and was seen dressed in one of the ensembles herself. Yami looked ravishing dressed head to toe in bright pink. She kept her hair open and wore dazzling diamond earrings.

At the end of the event, the actress spoke to the media about the collection. However, when a reporter asked about which colour she would choose for her own wedding, Yami dodged the question saying that she would just talk about Anita’s wedding collection. However, when the journalist insisted on knowing the answer, the actress completely ignored her and went on speak about how happy she was to be a part of the event and thanked Anita for the same.

The actress added that her mother tells her that every colour suits her well but went on to add that she feels that colour she was wearing at the moment looked the best.

Well, talking about marriage, Salman Khan’s rakhi sister Shweta Rohira recently claimed that Yami is a home-breaker adding that the actress has always had ‘hots’ for Shweta’s now estranged husband Pulkit Samrat which led to their marriage breaking apart.

Well is that why Yami decided to keep mum about marriage? Well, only time will tell.