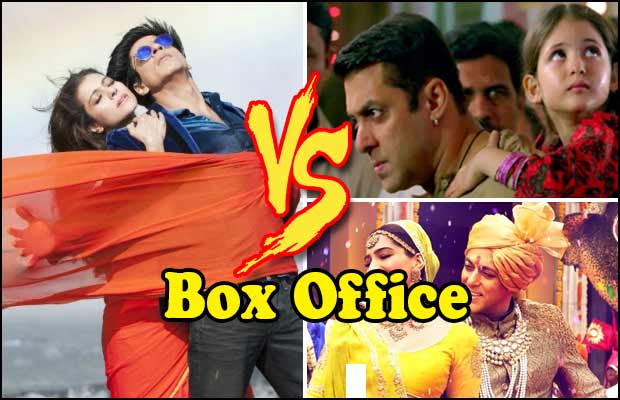 [tps_footer]Bollywood’s latest release ‘Dilwale’ starring Shah Rukh Khan has broken a huge record set by Salman Khan films in 2015. The film has become the highest opening film of 2015 in Overseas business by overtaking the previous record set by Salman Khan starrer ‘Bajrangi Bhaijaan’. Not only that, ‘Dilwale’ has also emerged as the biggest Bollywood opening film ever in the Gulf territory which is a huge market for Indian cinema. The Gulf performance of the film has also overtaken Hollywood giant release Star Wars: The Force Awakens.

Dilwale has reportedly raked in $8.5 million (Rs. 56.38 crores approx) in its first weekend overseas breaking the record of $8.1 million (Rs.53.69 crores approx) set by Salman Khan‘s ‘Bajrangi Bhaijaan‘. The film has thus earned the spot of highest opening film in overseas of 2015 just as the year is about to end. Well this is only possible with an SRK film as the actor has huge fan following globally thus attracting more audience. ‘Dilwale’ is also keeping the registers ringing in Indian box office, leaving its competition ‘Bajirao Mastani’ behind.

All the areas like UK, US, Canada, Australia, Gulf and territories like Pakistan, Nepal and Malaysia have responded very well to ‘Dilwale’. This can be because of the star factor of SRK who is a globally followed actor. Well seems like Shah Rukh Khan has surpassed Salman Khan in terms of global reach.[/tps_footer]