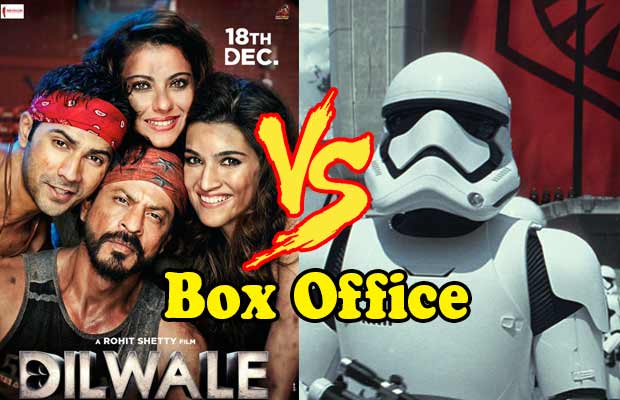 [tps_footer]Bollywood release ‘Dilwale’ starring Shah Rukh Khan has broken the record of Hollywood film ‘Star Wars: The Force Awakens’ in UAE. Both the films released on the same day there and according to leading distributors, people have chosen ‘Dilwale’ over Star Wars with the numbers being almost double for the former. ‘Dilwale’ is already breaking all sorts of record in India and this Bollywood hit flick is the people’s choice in UAE as well. Although ‘Star Wars: The Force Awakens’ is shattering box office records globally, in UAE the film has lost to SRK film.

According to reports almost 1,40,000 people went in to watch ‘Dilwale’ during its opening weekend on Thursday and Friday. Whereas only around 78,000 people chose to watch ‘Star Wars: The Force Awakens’. ‘Bajirao Mastani’ is also in the race but is far behind at only around 40,000 people approximately choosing the film over the other two releases. Well one of the reasons can be that ‘Dilwale’ is a light hearted romantic comedy drama whereas Star Wars: The Force Awakens is full blown action drama.

Being the holiday festival and all schools being shut in UAE, it is obvious that families chose to watch SRK movie over anything else as Bollywood movies are always welcomed there. In fact ‘Dilwale’ has seen the best performance in UAE till date in terms of Bollywood films released there. The film was expected to have more number of audience gathering to watch it over the weekend which is further breaking the record of ‘Star Wars: The Force Awakens’.

ALL LATEST BIGG BOSS 9 WITH SALMAN KHAN STORIES CLICK HER

Well interestingly in India, ‘Star Wars: The Force Awakens’ was postponed altogether in order to avoid getting involved in the already ongoing clash between ‘Dilwale’ and ‘Bajirao Mastani’. Two of the biggest films are already sharing the business and if ‘Star Wars: The Force Awakens’ was released now, it would have been a big mess. Hence the Hollywood film will be releasing on December 25, 2015 in India. Let’s see how the film performs in India compared to ‘Dilwale’ and ‘Bajirao Mastani’.[/tps_footer]