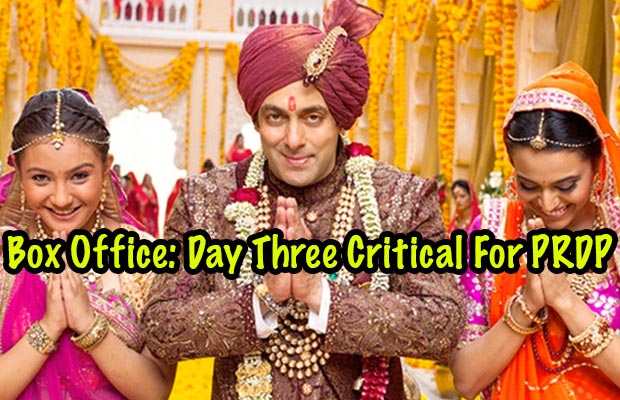 Salman Khan starrer film ‘Prem Ratan Dhan Payo’ is shattering all records since its release date and is already in the top 10 opening days of all time list. But the film is experiencing a downfall in its performance since today morning, which can be quite harmful for it in the long run. In order to touch the 250 crore mark which the film aims at doing, ‘Prem Ratan Dhan Payo’ will have to show similar performances today and tomorrow trying to cope up with its Friday business.

Since its release on Diwali, ‘Prem Ratan Dhan Payo’ become the highest opening film of all time by collecting Rs. 39 crores net approx. The film collected Rs. 29 crores net approx in its day two which is a little less than its day one collection, but strong nonetheless. After the two day run at box office, the total collections stand at Rs. 68 crores net approx. Since the film released before Friday, the major business has already been covered by it and hence matching similar amounts in the actual weekend is the real task for ‘Prem Ratan Dhan Payo’.

In order to stay in the race of crossing Rs. 200 crores net approx in its lifetime business, PRDP will have to perform its best today on Saturday. The film experienced 25% fall from its day one but that was expected to happen as the film saw one of the biggest openings ever. Saturday morning shows were comparatively slower, which is expected from big budget movies that usually pick up pace by evening. If the same does not happen for the film today and tomorrow. A drop of 10% can be handled but anything more than that, it will be difficult to say whether the 250 crore mark will be achievable or not.

PRDP is performing its best in the regions of Gujarat, Rajasthan, UP, CP Berar, CI and Bihar. The Delhi performance of the film has seen the most downfall, as the first day run was much higher than expected. After such a strong hold at the box office, the film’s performance on Saturday and Sunday will determine its weekday run.