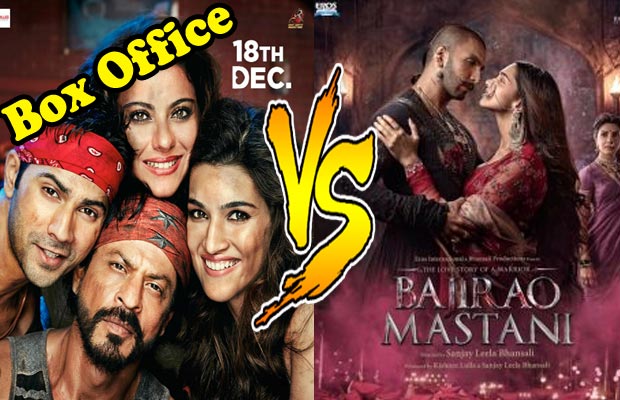 [tps_footer]Bollywood has offered two films this weekend, ‘Dilwale VS Bajirao Mastani’, out of which the former might have a tough road ahead. In ‘Dilwale VS Bajirao Mastani’, while the former has opened to a great start, it seems like the latter is lagging far behind in terms of the first day occupancy rates. ‘Dilwale’ has managed to gather more crowd all over India with only regions like Mumbai and Pune favouring both films at once. Numbers look really scary for ‘Bajirao Mastani’ which has got not even 50% occupancy rate of what ‘Dilwale‘ has received.

‘Dilwale VS Bajirao Mastani’ in terms of occupancy shows 65% approximately for the former which is very strong and if this continues till the evening, the film will emerge as the frontrunner. ‘Bajirao Mastani‘ has an occupancy rate of only 30% approx which is far less even by Sanjay Leela Bhansali’s standards. ‘Dilwale’ has got major audience in the regions of East Punjab, Nizam / Andhra, Mysore and East India apart from metro areas like Mumbai, Pune and Delhi. The film is also doing better in the Gujarat belt which becomes the deciding factor as we revealed earlier.

Given the opening rate and the areas dominated by the film, ‘Dilwale’ is easily looking at a first day collection of between Rs.20-30 crores net approx. It is hard to make predictions for ‘Bajirao Mastani‘ given the huge gap between the starting occupancy rates of both the films. The film being based on Maratha culture, it is less likely to cause a stir in the Northern regions of Delhi and UP. Whereas Shah Rukh Khan movies are well received by the Northern audience especially in the genre of romantic comedies.

‘Dilwale’ naturally has an upper hand here with more star power as the film stars Shah Rukh Khan and Kajol. Director Rohit Shetty also has comparatively more credibility for giving entertaining films that audiences usually prefer over historic ones like ‘Bajirao Mastani’ offered by Sanjay Leela Bhansali. After the great opening, we look forward to seeing the first day collections of ‘Dilwale VS Bajirao Mastani’. If there is no shift in the occupancy rates till evening, it will be clear which film emerges as the front runner.[/tps_footer]