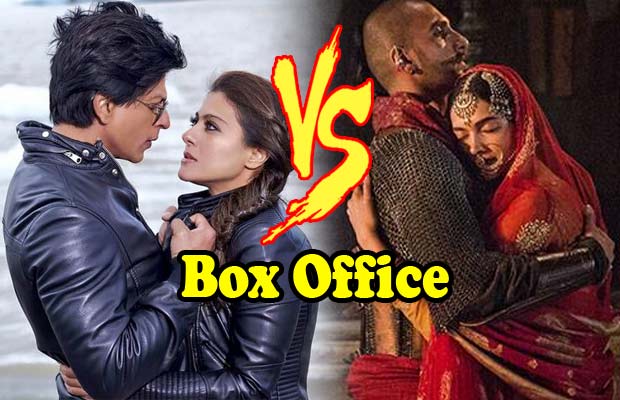 [tps_footer]Bollywood films Dilwale VS Bajirao Mastani are going neck-to-neck in their first weekday run and the results are quite amazing. After having such a splendid run over the first weekend, it seems like Shah Rukh Khan’s ‘Dilwale’ is getting defeated day after day by Ranveer Singh’s ‘Bajirao Mastani’. Although the margin is very less, the tables have surely turned with ‘Bajirao Mastani’ leading in collections for the third consecutive day. The Wednesday collections of both the films have also shown the same where ‘Dilwale’ collected a little less than ‘Bajirao Mastani’, but still leads total wise.

The Wednesday collections of ‘Dilwale’ is Rs. 8.25 crores net approx (Rs. 82.5 million) which is same as the Tuesday collection making the current total to Rs. 90 crores net approx (Rs. 900 million). ‘Dilwale’ is doing best in East India and West Bengal regions where Shah Rukh Khan followers are rushing to the theaters boosting the film’s growth. The clash with ‘Bajirao Mastani’ has affected the film a lot in its first weekday run as in all the three days the competition has scored better than ‘Dilwale’.

In Dilwale VS Bajirao Mastani, there is still a huge gap between the two films and now the second weekend will decide who precedes and who gets left behind. ‘Dilwale’ basically ruled during the first weekend but now that the numbers have changed for the film, it seems like ‘Bajirao Mastani’ will have a certain boost during the second weekend especially due to immense word of mouth and the Christmas holiday factor.[/tps_footer]