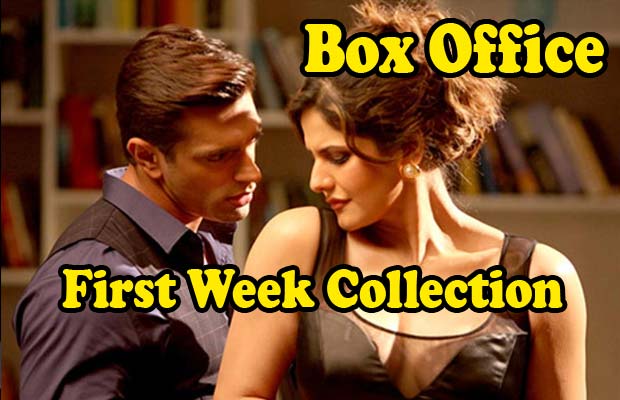 [tps_footer]Bollywood film ‘Hate Story 3′ has finished its first week run at the box office and has managed to make better than expected collections. As there are no new releases this weekend the film has chances of getting more response this weekend as well but certainly there will be significant drop. ‘Hate Story 3’ collected Rs. 36.50 crores net approx (Rs. 365 million) after its 8th day which is quite good as the drop was not very huge. A lot depended on its performance on the eighth day at the box office which decides its fate on its second weekend.

‘Hate Story 3’ is expected to collect more than Rs. 40 crores net approx which is similar to last year’s release Ragini MMS 2 which also collected similar amount, but a little higher. The film performed the best in UP, Maharashtra, CP Berar, CI where such genres work well. Performance in rest of Maharashtra apart from Mumbai and Pune have also been remarkable. ‘Hate Story 3′ is facing competition from the only other contender that is ‘Tamasha‘ which released much earlier but still has significant screenings left.

‘Hate Story 3′ starring Sharman Joshi, Zareen Khan, Karan Singh Grover and Daisy Shah among others is a journey of erotica which shows romance, love, hate and revenge. The film is much more steamier and bolder than its preceding two parts and has taken the erotic vibe a notch higher. Owing to the legacy of the film series, the film enjoyed an awareness among the audience who knew what the film will be offering. The director is now planning to make Hate Story 4 which is giving more word of mouth to the franchise. We now wait to see how the film performs on its second weekend, ultimately deciding its lifetime run before ‘Dilwale’ and ‘Bajirao Mastani’ releases.[/tps_footer]