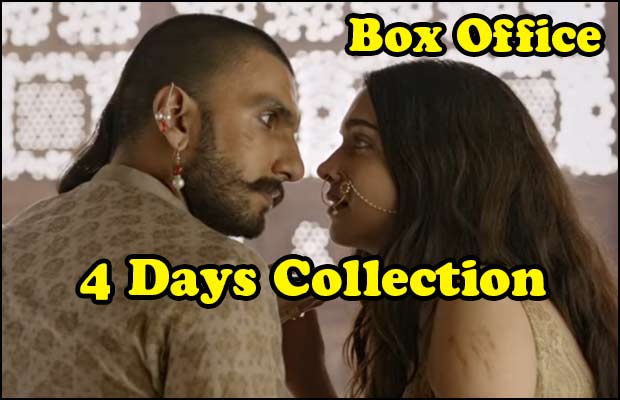 [tps_footer]Bollywood release ‘Bajirao Mastani’ starring Ranveer Singh, Deepika Padukone and Priyanka Chopra has got a good Monday start. The film did not drop a lot from its Friday collection and comparatively the drop has been of only 15%. The weekend performance of the film was affected by its competition ‘Dilwale’ hence weekdays is the recovery time for ‘Bajirao Mastani’. The Monday collections of the film have been Rs. 10.25 crores net approx (Rs. 102.5 million) which is pretty great considering the tough competition.

‘Bajirao Mastani’ has been getting lot of good word of mouth in India as well as in foreign countries where the film has performed well, but not better than ‘Dilwale’. The film has also entered the list of top 5 best weekend openings worldwide of 2015 on the fifth position whereas ‘Dilwale’ is on third. The great start on Monday ensures a steady weekday run ahead as it is very important for a big budget movie like this to sustain over the weekdays. The film can expect to perform well due to the holiday factor on its second weekend as well.

Compared to ‘Dilwale’ the first Monday business of ‘Bajirao Mastani’ has been better as the former experienced major unexpected drop in its collection compared to Sunday. ‘Dilwale’ enjoyed an upper hand during the weekend and performed much better than its competition. The film is however facing lot of backlash due to protests even now, which gives ‘Bajirao Mastani’ an advantage to some extent.[/tps_footer]