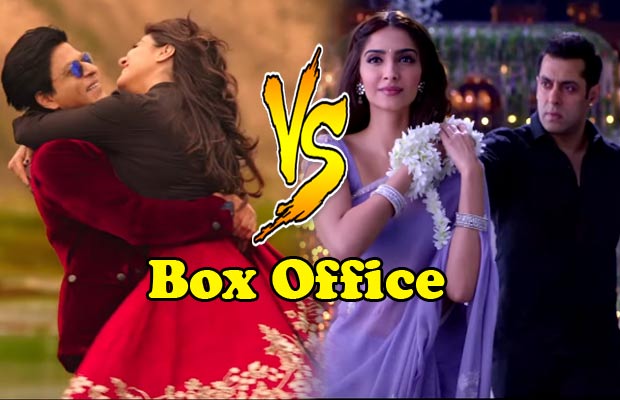 [tps_footer]Bollywood film ‘Dilwale’ starring Shah Rukh Khan is all set to beat Salman Khan starrer ‘Prem Ratan Dhan Payo’. Wondering how? Well the film is going to beat PRDP only in certain sections of India where it has managed to perform better than the Diwali release despite all the circumstances. ‘Dilwale’ has opened to a good start but nonetheless is far behind ‘Prem Ratan Dhan Payo’. But in terms of certain areas in the South as well as East India, the film has outshine PRDP which is quite surprising.

When Salman Khan‘s ‘Prem Ratan Dhan Payo’ released during Diwali, it had a four day weekend due to the holiday and also faced absolutely no competition. Thus the numbers bloomed like anything making it the highest grossing film of all time in Bollywood. ‘Dilwale’ however faces competition from ‘Bajirao Mastani’ which is compromising its business in few sectors. Given all these circumstances, for ‘Dilwale’ to beat PRDP in any way is very surprising.

‘Dilwale’ has performed better in places like Assam, Tamil Nadu and Kerala which are small sectors for Bollywood films. This might be because of the endless promotions done by Shah Rukh Khan and Kajol who even appeared in Malayalam TV shows. Other large sectors like Bihar, West Bengal and Mysore also have a good chance of surpassing the performance of ‘Prem Ratan Dhan Payo’. To say that this is the SRK factor would not be wrong as a lot is riding on the actor’s image alone for ‘Dilwale‘.

‘Dilwale’ received 65% occupancy rate and collected Rs. 22 crores net approx on its first day at the box office. ‘Prem Ratan Dhan Payo’ on the other hand had got Rs. 39 crores net approx on day one making it the highest opening film of all time. PRDP also crossed the 100 crore mark in its first weekend, so now we look forward to see if ‘Dilwale’ also manages to do so within its three day weekend.[/tps_footer]