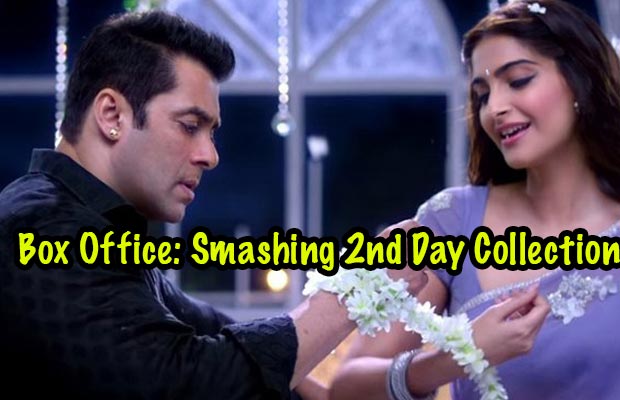 Bollywood film ‘Prem Ratan Dhan Payo’ starring Salman Khan has finished a strong day two at the box office by making another record. The film that proved to be the biggest opening films of all time has once again made a record by joining the top 10 biggest weekend collections list. ‘Prem Ratan Dhan Payo’ collected Rs. 29 crores net approx in its day two which is a little less than its day one collection, but strong nonetheless. The film is surely fulfilling all expectations and is performing the best owing to the Diwali holidays.

‘Prem Ratan Dhan Payo’ starring Salman Khan and Sonam Kapoor enjoyed the best opening day ever with an average collection of 70-75% throughout the country. ‘Prem Ratan Dhan Payo’ is being screened across 4200 screens in India, and each of them is expected to rake in similar amount of collection. The film collected around Rs. 39 crores next approx in its Hindi version on its first day. After the two day run at box office, the total collections stand at Rs. 68 crores net approx.

The film experienced 25% fall from its day one but that was expected to happen as the film saw one of the biggest openings ever. PRDP is performing its best in the regions of Gujarat, Rajasthan, UP, CP Berar, CI and Bihar. The Delhi performance of the film has seen the most downfall, as the first day run was much higher than expected. After such a strong hold at the box office, the film’s performance on Saturday and Sunday will determine its weekday run.