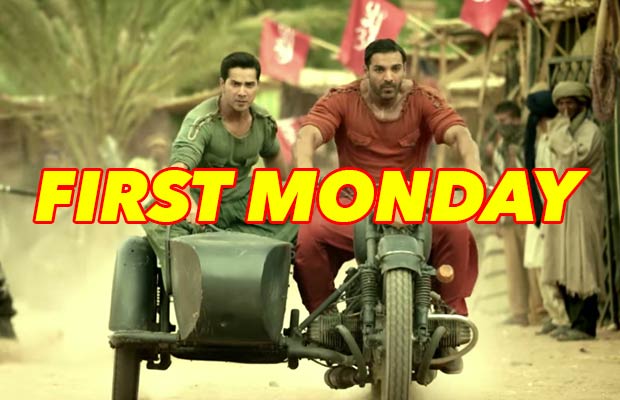 [tps_footer]Rohit Dhawan directorial ‘Dishoom’ starring Varun Dhawan, John Abraham and Jacqueline Fernandez has crossed its first Monday at the box office. The movie is witnessing above average viewers at the screens. The film opened on an average note of 30%. The weekend was free for ‘Dishoom’ but it could not garner large numbers.

The release date of the film was apt because it had no competing film. However, the four weeks old film ‘Sultan’ still was more preferred by the masses. The Varun Dhawan starrer film was much awaited by the youth because of the star cast. The film received mixed reviews which also did not generate much curiosity amongst the masses.

The film dropped in its collections on Monday by 55% which is higher than the norm. The film gained most of its collections from the metropolitan multiplexes. The slow weekend earning was a disadvantage for the overall collection.

It can be assumed that ‘Dishoom’ will pull off the mark of around 53 crore net approx. in this week. The movie was expected to do well because of the strong star cast and entertaining genre. Additionally, the songs and the promotional activities were also quite well placed. But none of these tactics could translate into high box office collections![/tps_footer]