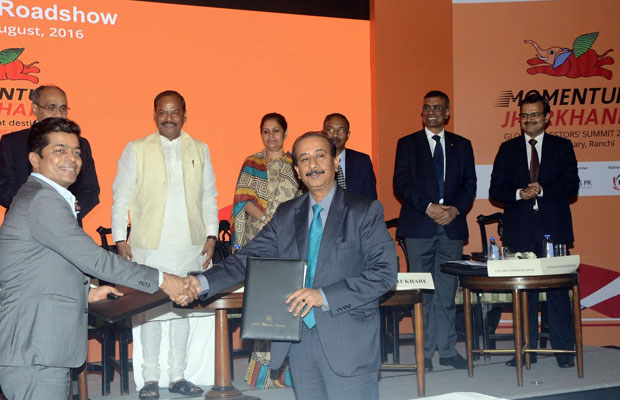 The Government of Jharkhand signed MoU with Carnival Group for setting up minimum 75 theatres-cum-recreation zones in 18 out of the state’s 24 districts at the Calcutta leg of Momentum Jharkhand, the state’s ongoing sales pitch in metros to tap entrepreneurs before its global summit in Ranchi in February 2017. The State Urban Development Department Secretary A.K. Singh and Carnival Group Chairman Dr. Shrikant Bhasi has signed the pact on 19th August 2016 wherein the company would develop a chain of recreation zones, each unit comprising a multiplex, food court, retail and gaming zones.

This is part of the Government’s efforts to refine its social infrastructure, where entertainment and recreation have assumed increasingly critical importance to enhance urban cosmopolitanism, boost employment opportunities and woo global investors. Carnival group is set to establish centers across the state that will blend in skill, entertainment and education.

Addressing delegates, the Hon’ble Chief Minister of Jharkhand Shri Raghubar Das said, “There are many options in Jharkhand like entertainment, tourism, food processing, IT sectors with good investment potential. We are trying to address each sector in a phased manner to attract investment.”

“According to tie-up, Carnival will set up the minimum of 75 theatres-cum-recreational zones in 18 districts of the 24 districts of Jharkhand. The state government will facilitate them land from an acre to 1.5 acres per project,” said Under Secretary of The State Urban Development Department Rahul Kumar.

Carnival Group spokesperson said, “We are currently busy with district surveys and will launch one-point leisure and lifestyle hangouts for youths and families. In the process of developing greenfield projects , we may take up additional existing infrastructure such as spacious loss-making single-screens to remodel them and make it viable. According to MoU, we have two years from today to start work at the ground level.”