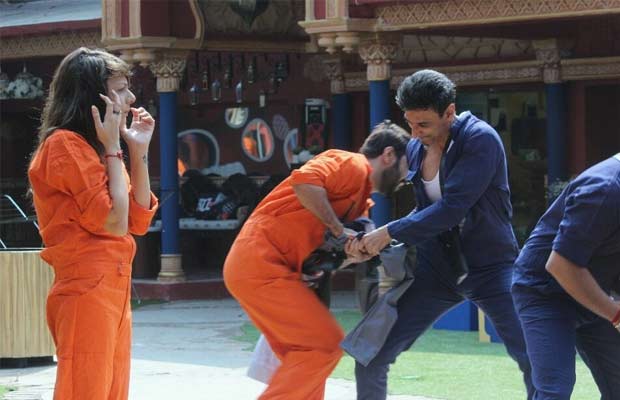 Bigg Boss announced luxury budget task, “BB Laundry” where the housemates had to wash, dry and iron the clothes after taking it from a conveyor belt. Well, another task where celebrities and Indiawale had to face-off to win the task. No task is complete without drama and fights and this task too, saw an ugly fight between both the teams. This time, Navin Prakash lost his patience, which was quite shocking.

During the task, Rohan and Mannu together fought with Rohan Mehra. The fight went worst and the three got physical, which made housemates interfere to apart them. It all started after Navin Prakash spoiled the clothes of celebrity team, leaving them annoyed. After losing their patience and getting into a heated argument among themselves, celebrity contestants also spoiled the clothes of the opposite team. Navin Prakash showed his shocking side that even left his teammates’ wonder.

Amid everything, Manu and Manveer pull Om Swamiji’s leg by telling him that he can act in a film. To which Om Swami reacts saying that an autobiography on him is being made and that he is going to portray his own character in the film. Not stopping there, he even went on to say that the budget of his film is around Rs.100 crore that left everyone splits into the laugher. He also said that he is in talks with producers and directors over the finance of the film. Now, that was literally funny and fake from Om Swamiji’s side. Nevertheless, he was entertaining than irritating for a change.

At the end of the day, Bigg Boss announces the results of the first round and both the teams lost the day 1 task as they failed to reach the target give.

Later by night, Mannu and Monalisa were seen flirting with each other in the living area. After Mona complaints of back pain, Mannu tells her that wish he could have been able to give her back massage.  If that was not enough, the duo wished each other good night by sharing milk in the same cup.

Is love brewing between these two or is it a part of a strategy to stay in the limelight? Only time will tell better!

What do you think  about tonight’s episode? Was it entertaining? Share your thoughts on the same in the comments section below!