[tps_footer]Celebrity lives are not just all fun and glamourous. Sometimes, it becomes too hard for them. It seems pretty amazing but at times, it gets awful when it’s not their fault. One such awful incident happened with comedian and actress Amy Schumer.

2015 was a big year for stand-up comedian turned actress Amy Schumer. She bagged so many nominations for her TV show and her movie. Since then, she has sky-rocketed. The actress was performing this weekend in Greenville, South Carolina. From what we saw on her social media, she was indeed there to have a good time. Until, a bad incident happened with a fan.

While touring the place, a fan ran up to Amy to ask for her picture. Instead, he didn’t ask but scared her completely. He came up to her, with a phone ready to click a selfie when she asked him to back off a little. But, he did not. Instead, he said that we pay you to get clicked with fans. This occurred sometime on Saturday (April 30) morning in the South Carolina town.

This incident did not go well with Amy when she clearly asked the man to back-off. She took to her Instagram account to rehash the entire incident with a picture of the man. She also said that from now onwards she won’t be taking any pictures with any fans because of the guy who crossed the line.

We are glad that Amy is safe and that she had a great show. 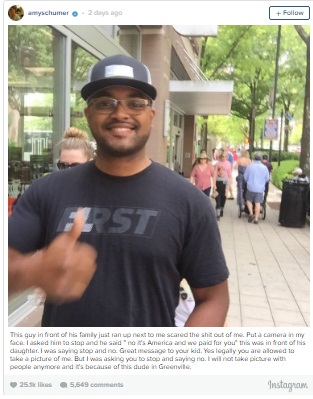 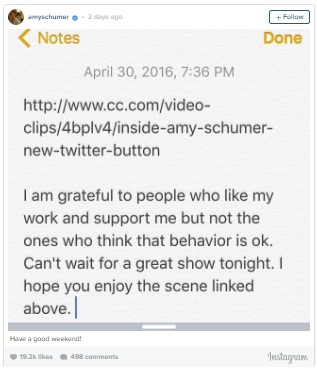