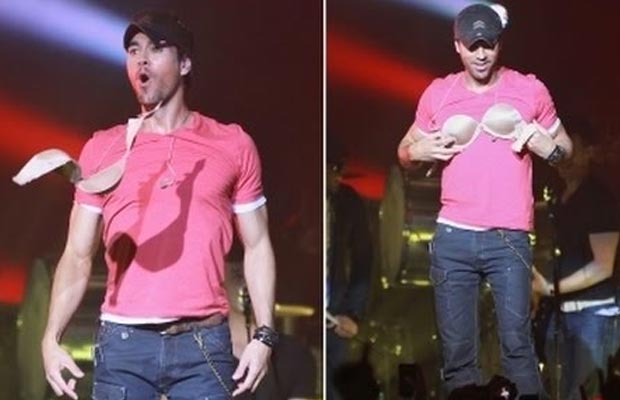 [tps_footer]Hollywood musician Enrique Iglesias has managed to make the President of Sri Lanka very angry after his recent show in Colombo. Leaked videos from the stage performance show Enrique Iglesias collecting the undergarment thrown by female fans who went all crazy during the concert. Girls were even seen running up on stage hugging and kissing the singer who set the stage on fire. Sri Lankan President Maithripala Sirisena is totally disappointed about this incident and has apparently made a public statement bashing the organizers of this show for the obscenity.

According to TMZ, Sirisena stated that he is not advocating to beat the uncivilized women present at the concert with toxic stingray tails, but he believes that the people who organized such an event should definitely be beaten for their act. According to Sirisena the act of removing and throwing their undergarment is something which is against the cultural values of his country and he is clearly offended by the same. Enrique was seen merrily collecting all the clothes being thrown at him, as it is nothing new for the hot singer.

Enrique Iglesias is currently on the world tour for ‘S** and Love’ and the theme is in itself enough to irk the culturally reserved countries like India and Sri Lanka. The video from the concert was quick to go viral because of its controversial nature and the President’s statements have only added fuel to the fire. Well till now there hasn’t been any official complaint of any nature against the show organizers but going by the threatening statement made by Sirisena, it cannot be predicted whether this matter will get blown out of proportion.

Watch the video from the concert where crazy fan girls lost control and threw their clothes at Enrique Iglesias. Watch the singer hug and kiss one of the fan girls on stage too[/tps_footer]